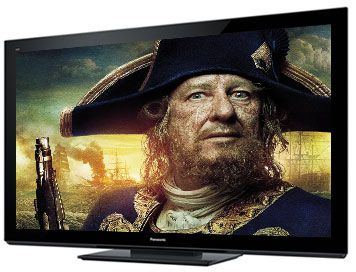 65 inches is big, but if you can accommodate the VT30 you’ll be rewarded

If you aren’t convinced that the Panasonic TX-P55VT30 is big enough for your abode, then perhaps this 65in version will suffice.

The jump in size does mean it has to work a little harder, but a set of this calibre is more than up to the task. Size is the only difference between this Panasonic and the 55in model.

Specification is identical to its smaller sibling, this includes a quartet of HDMI inputs, a wi-fi dongle and Freesat and Freeview HD TV tuners.

Two pairs of active shutter, 3D glasses thrown in as standard – although if we were spending this kind of cash on a new TV we might expect a couple more pairs thrown in just to soften the blow on our bank balance.

If you have read our musings on the 55in version you probably won’t be too shocked when we tell you that our appraisal of this version runs along the same lines.

Vibrant, pin-sharp image
Considering its screen is so large, the fact that the Panasonic’s picture remains so clean and cohesive is quite a remarkable feat. Even when it’s forced to make the most of standard-def TV signals, the set’s processing and internal scaler show there’s no job too big.

Of course, the switch to 1080i HD broadcast of Doctor Who from the BBC or the 1080p/24fps video of a Blu-ray proves a snugger fit and more apt for a TV of this ilk.

Images are pin-sharp, colours are wonderfully vivid yet natural and convincing. Contrast is as brilliant and shadow detail as insightful as we described on the 55in version, while motion is relatively smooth with only minimal flicker creeping in.

That’s impressive considering the size of the task in hand.

As is the case with the Award-winning 55in version, the way the screen handles 3D playback is worthy of serious praise. While some smaller sets suffer from crosstalk, the Panasonic remains resolute, serving up a beautifully rounded and inviting 3D picture.

Avatar in 3D looks stunning, whether you’re being captivated by the on-screen action or sitting back and admiring the bright, colourful scenery of Pandora.

Stream Eastenders in iPlayer’s version of high-definition and the picture holds up extremely well in terms of clarity and detail compared with rival sets.

And, once again, the VT30 proves to be one of the better-sounding sets in this class. Using the same three-speaker configuration of its smaller sibling, you might think the TV could struggle – but there’s still an acceptable amount of weight fired out, combined with a decent level of detail and sense of directness.

If you want the best that this screen size has to offer we’d argue that you’re looking at it. The 65in VT30 is stupendous for the money and its size.