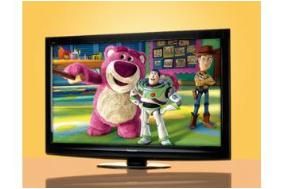 If the ’G20’s an indication, Panasonic has taken some big steps forward with this generation of plasmas

Officially priced at £1350, Panasonic's TX-P46G20 has already seen discounts online that makes it even more affordable. Not that the specification reflects that.

It's a shame more effort hasn't been put into making the set as stylish as it is feature-laden, but it's the performance that matters most, and it's clear that a great deal of work has gone in here.

Play the opening of the Harry Potter and the Order of the Phoenix Blu-ray, and it's obvious much work has gone into the 600Hz motion processing, which disappointed last year, but now grips challenging vertical and horizontal pans brilliantly.

Deep blacks and punchy whites
The Dementors' attack in the tunnel proves contrast has been improved, too, with typically deep plasma blacks joined by untypically punchy whites, creating a creepy but exciting scene.

Unfortunately for Panasonic, this isn't a perfect performance, though. There's a touch of overexuberance to the colour palette that some might describe as richness, but that none could describe as genuine neutrality.

More significantly, while perfectly reasonable in isolation, detail and definition look rather soft and lacking in insight next to the best in its class.

HD from both of the tuners shares Blu-ray's strengths and weaknesses, so again there's impressive contrast and grip, if not quite the greatest definition or colour control.

If you have the choice, HD on Freesat is marginally more insightful and composed.

Standard-def softer by a smidge
With standard-definition content, the Panasonic is closer to its key rivals. It's softer, but only by a smidge, and the overexuberance of the colour palette is less noticeable.

The Freeview tuner offers slightly more detail than the Freesat option – though, unless you're happy switching between the two, it's Freesat we'd prefer overall.

The 'G20's performance is rounded off with stereo sound that's pretty impressive by flatscreen standards, producing a little more weight and width than most, though there's a touch of fogginess in there, too.

And as with all Panasonic's 2010 Freeview HD-equipped sets we've tested so far, it won't transcode the multichannel AAC sound on BBC Freeview HD broadcasts to Dolby Digital 5.1, so you'll only get stereo through your home cinema amp or receiver via the digital connection. (More details here).

Overall, though, this is a fine large-screen plasma set.