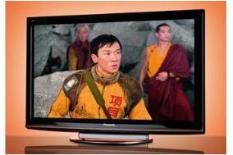 Even if you take Freesat out of the equation, this Panasonic is worth the extra over its TX-P46S10 sibling, but that doesn’t make it the best

However, Freesat isn't its only spec-advantage over the 'S10 – it also boasts 600Hz sub-field drive motion, DLNA connectivity, a fourth HDMI input, and, perhaps most crucially, Panasonic's NeoPDP panel.

With all those extras, can the 'G15 justifies its premium? Well, to cut a long story short; yes, it can. The problem is that this TV's greatest threat comes not from within, but from LG in the form of the £840 47LF7700.

Easy set up for a decent picture
The styling of Panasonic's menus are dull, but extremely clear. More importantly, the lack of confusing picture ‘enhancers' means five minutes with a THX Optimizer should be all you need to get the best picture possible.

And a very pleasant picture it is, too. Play X-Men Origins: Wolverine on Blu-ray and the 'G15 produces a picture full of detail and sharply defined edges.

That NeoPDP panel develops blacks that are deeper than those from the 'S10, but it's also punchy and insightful, so although the military base is dark and foreboding, you don't miss out on any of the excitement or gruesome detail of Wolverine's adamantium injection.

Motion smear and judder
The picture isn't perfect, though. Motion, though marginally better than that from cheaper Panasonic models, still smears and judders more than other comparable sets, proving that the big numbers attached to motion processor modes are no guarantee of quality.

And, although some will appreciate the richness and warmth of the 'G15's colours, they're not entirely neutral.

Freesat is just a little cleaner, and there's the obvious bonus of high-definition material, but the vibrant, stable pictures of the digital tuner mean Freeview users needn't feel short-changed.

Upscaled DVDs are also very clean and stable, and there's more detail here than on the 'S10, though still less than on the cheaper LG 47LF7700.

It's more than capable, for sure, but this Panasonic's weak sound and lack of extra sparkle mean it falls short of the full five stars.