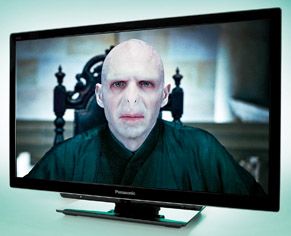 If you’re prepared to pay the money for 3D performance, this is the way to go

This is Panasonic’s smallest 3D TV for 2011, and the only 32in 3D TV in its range. Splash the cash and you’re ensured an exhaustive spec, but will its performance fulfill its side of the bargain, too?

High-quality looks and spec
It looks and feels like a premium model: heavy and slim, with a smart, silver trim along the edge of the panel that’s matched by a silver remote (rather than the black offering that comes with most affordable sets).

Sat on its swivel stand, it looks every bit the TV of the future.

And the specs back that up. It’s a full HD, edge LED-backlit screen. The screen boasts 400Hz processing that aims to deliver smoother motion, a wide viewing angle, four HDMI inputs and an optical audio out.

Three USB inputs also let you add an external hard drive to use as a recording device, or view files stored on memory sticks.

You will need to get yourself a pair of £100 Panasonic 3D glasses, however, as they aren’t included as standard.

And about that 3D: it’s rather good. In Open Season, one of the early 3D Blu-ray releases but still a good example, the Panasonic shows an impressive sense of depth.

It’s detailed, too, there are few signs of crosstalk, and motion is handled comfortably.

2D Blu-rays look a tad flat
Panasonic has delivered some of the best 3D TVs around so far, and we’re happy to say that, so far, it would be our 32in 3D choice (granted, it's expensive so you might expect no less).

With Blu-ray or DVD discs, results are pleasing on the whole. Conversely, while the 3D picture delivers that very real feeling of depth, the 2D Blu-ray images can look a little flat compared with the best in class, contrast levels lacking some dynamism at times.

It’s the same with the Freeview HD tuner, which is otherwise strong, the picture processing helping to smooth over motion, though edges could be drawn sharper.

Freesat HD pictures are a little better, so opt for that if you have the facility. Both deliver a full-bodied sound, but it could be a little clearer at the top end.

Is it worth the extra for 3D?
Panasonic’s Viera Connect portal doesn’t have the ‘look at me’ feel of rivals, but it does have the same amount of content. The BBC iPlayer app is stable and more than watchable on this size screen.

So, would we pay the premium? If we were smitten with 3D, yes. If not, we might be thinking about how we’d spend that extra few hundred quid, as the 2D picture doesn’t quite justify the dosh.