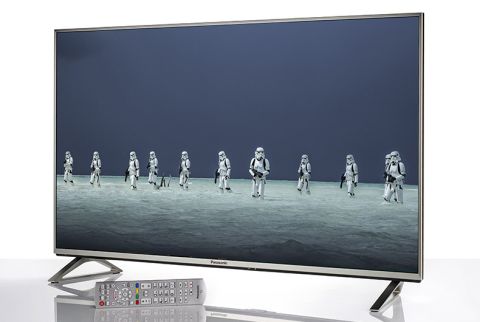 Sharp 4K images and plenty of smart features from a small, affordable screen

The Panasonic TX-40DX700B’s little sibling, the DX600, first convinced us that 4K on a 40in screen makes sense with the right set.

In fact, so convinced were we that, despite its four-star verdict, we gave it an Award at its screen size.

This set has a few added extras up its sleeve to tempt the upgrade though, not least HDR support.

Can this addition give it the bump it needs for that fifth star?

The Panasonic TX-40DX700 offers a decent enough build – sturdy, with a slim silver bezel, even though it doesn’t have the slimmest of profiles.

Two metal feet sit at either edge and, unlike the larger screen sizes in this range, they don’t offer the “Switch Design” flexibility that allow you to move them to a more central position.

They face inwards which seems odd – so much so it makes us think we’ve fitted them wrongly at first – but they let you squeeze the DX700 on to a smaller rack.

Around the back you’ll find three HDMI inputs, two of which are HDCP 2.2 certified, three USB inputs, an optical input and a shared composite/component video input.

There’s ethernet or wi-fi to get you online, which will unlock Panasonic’s wildcard in the shape of Freeview Play – a single hub that offers BBC iPlayer, ITV Player, All 4 and Demand 5 catch-up services as well as a seven-day scroll-back TV guide similar to YouView.

For its main interface, Panasonic continues its collaboration with Mozilla Firefox OS, which remains one of the more intuitive systems we’ve come across, and also one of the simplest.

With Netflix and Amazon among others available here – and support for both in 4K HDR - Panasonic’s on-demand service is one of the most complete currently available.

We particularly enjoy the ability to pin various bits of content – whether it’s in an app, web page or favourite channel – to the home screen for easy access.

There’s one remote control included in the box. It’s Pana’s standard remote rather than anything flashier, but it’s responsive and easy enough to navigate.

Unlike the Samsung UE43KS7500 there’s no UHD Premium badge here, owing to the DX700’s lack of brightness. Similar to the Philips 49PUS6401, it’s capable of only 350 nits, missing the 1000-nit benchmark by some margin.

The picture is equally as subdued as the Philips when compared with the super-bright Samsung, but there is still enough here to encourage you to take a closer look.

For a start, there’s more detail and sharpness to this picture than in the Philips, with outlines finely etched and more insight to faces and landscapes.

Colours are pretty accurate too – they may not always have the same impressive punch as the Samsung, but they’re subtle enough to show off differing shades that give a better sense of depth.

As you’d expect, 4K material fares best here. We watch Marco Polo in 4K HDR on Netflix and the extra detail available compared with Full HD is undeniable even at this screen size.

Bright, outdoor scenes show the best of the Panasonic’s capabilities, with colours balanced and well judged.

However, despite this set taking the step up to HDR, it’s really not this TV’s strong suit.

Where colours zing on the Samsung, the same are lost on the Panasonic – it simply doesn’t have the peak brightness to make colours jump out of the screen with as much impact.

This affects darker scenes too. In Marco Polo, inside Khan’s court, the fire lamps don’t punch through the shadows with the intensity we’d like, though there is a decent level of detail to them compared with SDR.

Dark scenes also struggle to deliver the shadow detail we need to keep things really engaging. Blacks will go decently black – deeper than with the Philips, if not as inky as the Samsung – but they’re a little flat and lacking in insight.

Watching in a darker room helps, or switching from Cinema (our preferred mode) to Standard – just be aware this brightens the whole picture and you’ll lose out on black level as a trade off.

Contrast could be better too, particularly when the extremes of light and dark are in the same scene together.

For example, the flicker of firelight on faces in a gloomy setting doesn’t throw up the same warm glow as we see on the Samsung – the DX700 appears to opt to keep things darker rather than having the know-how to maintain an even hand.

We put the upscaler to the test with a look at a handful of HD TV channels, which it manages convincingly, offering a solid, noise-free picture with sharp edges and plenty of detail.

Colours are equally well balanced here too, and even standard definition TV is watchable (if a little noisier and softer around the edges).

Motion can occasionally fluster it though – both here and on Blu-ray – so we opt for some minimal motion-processing help to keep things stable.

The sound the DX700 has to offer isn’t bad at all. There’s decent balance and enough body to allow you to crank up the volume if you need to without it making you wince.

Voices are clear and direct, but dynamics are understandably lacking for bigger, busier scenes.

For a second TV sound it’s passable, but if this is your main set you may consider investing in a soundbar to make the most of it.

There’s plenty to like about the Panasonic TX-40DX700B, not least its sharp, detailed picture and excellent operating system.

Freeview Play gives it a real upper hand for on-demand fiends and there’s no doubt its 4K pictures give it an insight boost from the Full HD options at this size.

However, its brightness issues mean HDR video fails to create as much impact as it should, and dark scenes could do with better contrast and shadow detail to really impress.

There are fewer compromises to make here than on a cheaper 4K set at this size, but there are still too many to earn the full five stars.

In particular, if you want to see what HDR can really do, you should consider spending a touch more for more-convincing performance.

But for a sharp 4K picture on a small screen and budget, the Panasonic TX-40DX700B is certainly worth a look.