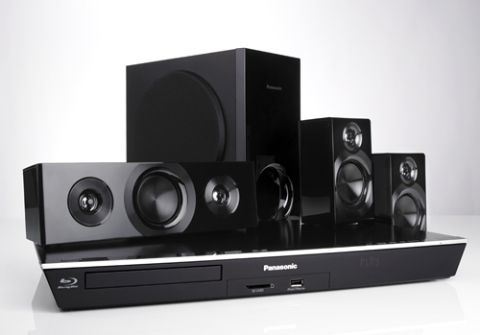 The Panasonic SC-BTT460 is the first of Panasonic’s 2013 home-cinema-in-a-box systems. Offering Blu-ray, 3D, catch-up TV and streaming movie services – as well as speakers and amplification – for £350, it’s an idea that’s hard to argue with. That said, you’d be forgiven for not noticing at first glance that the BTT460 is a brand-new piece of kit.

No doubt due to the popularity of soundbars, it seems the level of innovation in one-box systems – at least on this evidence – isn’t particularly high; this is much like last year’s models, on paper and out of the box. Let’s be thankful, then, that the 2012 models were already brimming with functionality…

The biggest change here might just be the price. This is a mid-range system (the SC-BTT560 and SC-BTT880 sit above it in Panasonic’s line-up), but nevertheless it seems cheaper than ever for such a product.

Two tall floorstanding speakers at the front are joined by two dinky satellite speakers and an equally compact centre-channel and subwoofer. They’re a little plastic-fantastic, as you might expect, but look smart enough in their glossy black finish.

As usual, the tall speakers come in parts – three, in this case – and require assembling. It’s easy enough and you can feed the supplied cables through the speakers for a neater finish. Once done they’re not exactly rock solid, but fine for the money.

The supplied speaker cables connect via proprietary connections to the rear of the main 3D Blu-ray player unit. This has had a slight redesign with a more angular shape and a silver flourish to bring the looks sufficiently up to date.

There’s certainly no shortage of connectivity here, but there is a notable exception: there are no HDMI inputs. So if you want to run an Xbox/PS3 or PVR through the system you’re limited to a solitary digital optical input (or an analogue audio input) and must use a direct video connection to your TV. HDMI inputs would be neater and handy.

Alongside the HDMI output, digital optical and analogue audio inputs, you’ll find the FM aerial socket, an ethernet connection and a slot for an optional extra wireless dongle (the BTT460 is wired-only out of the box).

On the front there’s an SD card slot and a USB connection for playback from memory sticks (the list of compatible file-formats is pretty exhaustive) and directly from iPods and iPhones. There’s no sign of an iPod dock or Bluetooth streaming, but you can stream media from a phone or tablet to the BTT460 over your network using the free Viera Remote 2 app.

There’s no sign of the new My Home Screen layout seen on Panasonic’s 2013 TVs, but the existing tile system is simple enough. Connect to your network and you’ll find BBC iPlayer, Facebook, Netflix and YouTube, among others, but none of the other catch-up TV services as yet.

Netflix worked well enough, although it took longer than we expected to make the leap to HD quality – naturally this is often network dependent. From the main menu you can make adjustments to picture and sound, and also jump easily enough to the various media inputs, FM radio, Blu-ray player and more.

So how does it perform? For £350, pretty darn well. We leave it doing its thing for a good 24 hours to run-in, and there’s no sign of any harshness or bright edges in the treble.

Watching the excellent Sherlock Holmes on Blu-ray, explosions are detailed

and exciting, with good dynamics and separation – all without sounding shrill, as these budget systems often can.

Another common issue is the handling of dialogue by smaller centre-channels. Again, the Panasonic SC-BTT460 does well. The sound is a little thicker than we’d like – noticeable throughout, though particularly with voices – but it is still fairly clear and certainly not lightweight or ever lost in the soundtrack.

A slightly sloppy subwoofer, relatively powerful but not very tight, does make for a warm, smooth, slightly soft sound, but we would prefer this to a bright, lightweight presentation.

The rear speakers perform well enough, with surround effects interjecting when called upon. The disparity in size means it’s not the most integrated set-up, though, with rear effects sometimes sounding a little obvious and detached – but for this sort of money, we won’t grumble too much. The overall tonal balance and sound of the rear speakers is fine.

We don’t expect a huge amount when it comes to stereo music playback – you can push it in to 5.1 if you really want – but listening via a connected iPod, or indeed to a CD, music has weight and excitement (if sounding a little leaden and warm).

Panasonic makes largely very good TVs and Blu-ray players, so we expect the picture to impress us – and for the most part it does.

We watch the vivid animation of Monsters Inc, and there’s excellent attention to detail, with every last animated hair visible on close-up shots. Colours are relayed with plenty of punch and body, and just the right balance of dynamic colour without looking over-saturated.

More natural-looking discs such as Sherlock Holmes look similarly impressive. Black levels are at times a little greyed-out and the gloomiest scenes could do with a bit more insight, but overall the picture is rich and enjoyable.

Fast motion occasionally causes some judder and loss of stability, but it isn’t too much of an issue. It’s more of the same with 3D: the player produces good, colourful pictures.

There’s a lot to like here. On sale for £350, and even cheaper in some places at the time of writing, the level of picture and sound quality on offer from the BTT460 is very hard to argue with. It’s easy to sit back and enjoy a surround-sound experience, with the bonus of catch-up TV and movie streaming, and that in itself is impressive.

That said, we have to qualify our praise. The lack of HDMI inputs is a shame and the selection of apps could be better, mainly in terms of catch-up TV. More pertinently, the sound can be a little thick and neither black levels nor fast motion are faultless.

We can absolve such an affordable piece of kit of many sins such as these, though, and it is a really rather charming solution – but we have to remain objective, so it’s an upbeat four stars rather than an unqualified five for the SC-BTT460.