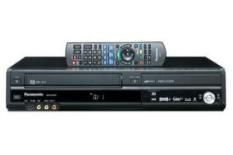 It's a world away from cutting-edge but it does exactly what it says on the packaging – and to a good standard, too

With all the attention being lavished on new tech such as 3D TV and Blu-ray, it's easy to forget where it all started.

Products like the Panasonic DMR-EX99V serve as a timely reminder that there are people for whom DVD is still the disc du jour and who need a VHS tape deck to play all those old movies and home recordings.

The 'EX99V also acts as a Freeview PVR. Inside, there's an integrated 250GB hard disc drive, on to which you can record TV programmes and even rip CDs at the touch of a button.

Considering you're getting three machines squeezed into one, the unit is reasonably easy to operate. Yes, the remote is packed with buttons, but it needs to be to cover all the functions.

Numerous recording modes
You can record in one of five different modes. 'XP' gives you the best results with a crisp, well-defined image and should accommodate around 55 hours of video on to the hard drive. Motion is a bit problematic and the image could be clearer, but overall you're treated to a very viewable picture. 'SP' recording mode bumps the recording time to 110 hours and is only a slight step down in quality.

The 'EX99V can upscale DVD and Freeview images to 1080p over HDMI, and the results are good, if not spectacular. Spin The Men Who Stare at Goats and as Ewan McGregor and George Clooney drive through the desert, the player displays good edge definition and detail.

As is the case with Freeview, there is the odd movement issue and images aren't quite as pristine as we'd like, but there are no major issues.

Of course, a machine like this won't appeal to everyone, but if you're looking for something with all these features rolled up into one package, the 'EX99V is one to consider.