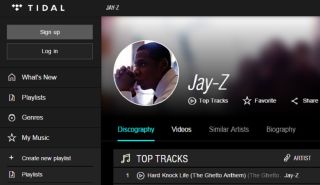 Tidal has confirmed that Andy Chen, who was CEO of Tidal parent company Aspiro before the Jay-Z takeover, has left the company.

He has been replaced by its former CEO, Peter Tonstad, who will act as interim Tidal CEO. The company also confirmed a number of further redundancies.

A statement announcing the changes said that new CEO, Peter Tonstad, was "streamlining resources to ensure talent is maximized to enhance the customer experience.

"We've eliminated a handful of positions and refocused our company-wide talent to address departments that need support and cut redundancies. Tidal’s offices globally will remain and grow: we are already hiring for several new positions now.

"We're excited about our future and what's in store for fans who want the best listening experience."

Tidal relaunched in the US and worldwide with a star-studded press event that revealed a number of celebrity investors, from Jack White to Madonna. The event was greeted with a mixed response, with many criticising the focus on big-name artists.

Tidal aims to differentiate itself with editorial content, curated playlists and exclusive music and videos, plus of course lossless, CD-quality streams for £20/month premium users.

Competing with the likes of Qobuz and Deezer Elite on Sonos in the lossless market, the launch of Tidal's £10/month standard service shows it clearly wants a piece of the mainstream, too, with runaway market-leader Spotify firmly in its sights.