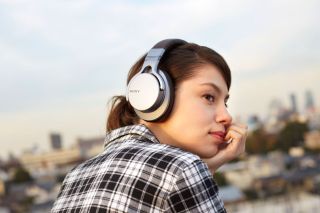 The four new products are the MDR-1ABTs; the MDR-ZX770BNs; the MDR-ZX330BTs; and MDR-AS600BTs – all of which feature NFC for instant wireless connections to enabled Walkmans, MP3 players or smartphones.

And its the MDR-1ABTs (above) that come with LDAC on board, a new codec that Sony says delivers high-quality wireless listening by sending three times as much data as a standard Bluetooth connection is normally capable of.

MORE: Sony refuses to rule out exiting TV and mobile markets; Video and Sound businesses to be spun off

Sony says the new LDAC technology will stream "pristine, lag-free" audio from compatible devices such as the high-resolution NW-ZX2 Walkman, the £950 portable player we first caught sight of at CES 2015 in January.

In addition, the MDR-1ABTs include 40mm HD driver units and DSEE technology, which is said to serve up "a more natural sound experience". A touch sensor at the side, meanwhile, lets you skip tracks or adjust volume.

The second addition to Sony's headphone line-up is the MDR-ZX770BN (above) – the latest digital noise-cancelling Bluetooth headphones that sport around-the-ear design and uses the company's DNC software engine.

With noise cancelling on, it's claimed the MDR-ZX770BNs can last up to 13 hours between battery charges. Meanwhile, the third addition – the MDR-ZX330BTs – contain 30mm driver units and has a battery life of 30 hours.

The final new headphones are the MDR-AS600BTs (above) – designed for the "toughest workout", letting you exercise with the convenience of Bluetooth streaming. A built-in mic and splash-proof design are also prominent features.

MORE: 5 of the best Bluetooth headphones