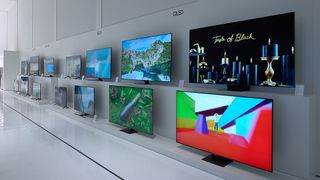 Following its 8K QLED TV announcement at CES 2020, Samsung has confirmed its 4K QLED TV line-up for this year.

While the flagship 8K Q950TS QLED TV, which Samsung announced at CES, gets a new 8K processor over last year's 8K models, the 2020 4K QLEDs are powered by a new 4K processor, too.

Meanwhile, the new Adaptive Picture+ mode can optimise the brightness of the TV based on room conditions. Active Voice Amplifier automatically bolsters voice clarity when an increase in surrounding noise is detected, too.

Every 2020 QLED TV is compatible will Samsung's new Symphony concept, which sees the TV's top and side drivers working in conjunction with the speakers within a connected Samsung 2020 Q-Series soundbar. As opposed to TV speakers being muted when a soundbar is connected, here they all work together in perfect... symphony.

Samsung's user interface is already one of the most intuitive around, but new tweaks aim to make it even more so in 2020.

A new universal guide will combine OTT services (such as Netflix) to display a one-stop-shop of content, organised into sections labelled 'On Now' and 'Continue Watching'. Which services' content will be included depends on what service metadata Samsung can pull, but we're told by a Samsung representative that the bigger services such as Netflix and Amazon will be onboard at launch.

Last but not least, Tap View allows compatible (which could just mean Samsung) phones to mirror their screen to a 2020 Samsung TV simply by touching the two devices together.