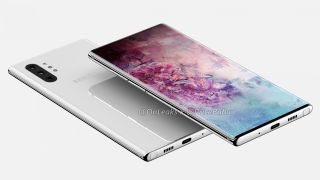 The Samsung Galaxy Note 10 is set for a 7th August launch in New York, as the rumours go.

The latest iteration of the famous phablet looks set to be unveiled at a Samsung Unpacked event, according to a CNET report, and the timing certainly fits with Galaxy Note launches from previous years.

Word has it that the Galaxy Note 9 successor will come in two variants – the Note 10 with a 6.3in screen, and the larger Note 10 Pro with a 6.75in display – both featuring QHD+ curved AMOLED screen technology.

But the sad news is that Samsung could axe the 3.5m jack from its big phone for the first time. The dedicated Bixby voice assistant button is also said to be a casualty of the latest generation, but the fingerprint reader should be present and correct. It’s likely there’ll be some water resistance of one kind or another given that that’s been the norm with the Note series of late, too.

It seems the punch-hole selfie camera has moved into the centre near the top edge, and round the back is supposedly a four-lens array including a 3D sensor for capturing depth. However, it's possible that this high spec optic array will be exclusive to the Note 10 Pro only.

Another interesting potential feature of the Note 10, as reported by T3, could be its ability to beam Android apps to a computer screen, keyboard and mouse set-up. Until now, people looking to use the Note phones as the heart of a portable desktop computing experience have had to buy Samsung’s £140 DeX hardware. The new wireless capabilities would mean that this physical connection is no longer needed, saving money and hassle.

Lastly, and in some ways most usefully of all, both Note 10 phones are rumoured to arrive with some pretty serious batteries at around 4500mAh capacity and with 45W quick charge abilities.

With several weeks to go until a Samsung Note 10 and Note 10 Pro launch event, leaks will no doubt be plentiful, and details firmer, in the lead up.