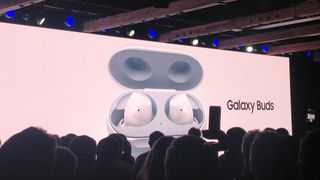 As expected, Samsung has used its Galaxy Unpacked event to announce its next pair of true wireless earbuds, the logically-named Galaxy Buds.

With sound by AKG, the next-gen in-ears have a six-hour battery life for music playback (or five hours of call-making), and are compatible with wireless charging from an all-new charging case. A wireless power-share feature means the case can be wirelessly charged by being placed on the Galaxy S10+ smartphone, too.

Dual microphones in each bud – one inside, one on the outside – work to recognise the sound around you and adapt volume levels during call making so you can be heard clearly down the other end of the phone.

The Samsung Galaxy Buds will be available from 29th March for €149. However, if you pre-order an S10 or S10+ before 8th March, you can get a pair free!