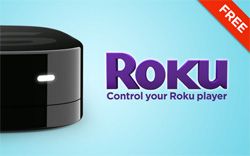 Roku has launched the Roku Android remote to control its streaming network players.

Following the launch of an iOS app, the free Android remote will control Roku's range of streaming media devices.

Switch channels, browse content and play, pause and rewind content, the Roku Android remote will work with any Android 2.1 device or later and with any Roku product.

Roku recently launched two new streaming network players, the Roku 2 XS and Roku LT, complete with BBC iPlayer and Netflix, which can both now be controlled using your Android smartphone.