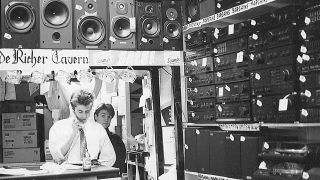 Julian Richer, founder and MD of Richer Sounds, has announced he is stepping back from day-to-day running of the business and handing control to his employees.

Richer, who opened his first shop in 1978, aged 19, has announced he will be transferring 60% of his shares to an Employee Ownership Trust, the Richer Sounds Trust.

While the AV mogul will be staying involved with the business, the running of Richer Sounds will be in the hands of the existing management board, a colleagues' advisory council and trustees.

The management board is made up of directors, the newest of which has served for 25 years, while the Colleagues’ Advisory Council will comprise current employees and is tasked with representing their interests.

The Guardian reports that the company will pay Richer an initial £9.2m for the stake but the businessman will give £3.5m of that back to staff, who will receive £1000 for every year they have worked for the retailer. The average payout is said to be £8000. The company’s nine directors, who Richer said earn six-figure salaries, are not included in the bonus pool.

Richer commented: "I have always planned to leave my company in trust on my death for the benefit of the colleagues in the business. Having hit the ripe old age of 60 in March, I felt the time was right, rather than leaving it until I’m not around, to ensure that the transition goes smoothly and I can be part of it. The company’s banks, suppliers and customers should feel that the move is (hopefully) seamless and Richer Sounds carries on as normal."

Overseeing the transition is David Robinson, chairman of Richer Sounds, who said: "It’s incredibly exciting times and allows our colleagues to feel even more connected to the company. They have a real stake in the success of the business and can take pride in knowing that they are shareholders, building for the future."

Richer Sounds currently has 53 stores nationwide and trades online. Having started in budget hi-fi, the retailer has now spread out to TV, home cinema and premium audio.

The company is proud of its efforts to support its staff - "happy staff = happy customers" – and the British economy, with its website stating, "we’re a British company, paying British taxes, proud to be supporting the British economy and high street".