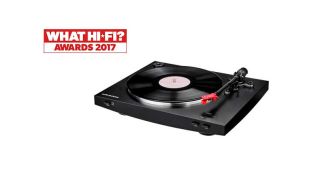 As much as we try to steer clear of tired, reductive clichés like ‘vinyl revival’, the addition of two new turntable Awards categories this year would suggest efforts are being redoubled by manufacturers as well as at those wildly overworked pressing plants.

In 2016, Rega took the prize as our most affordable Award winner with its impeccable Planar 1 but, while that deck retains its champion status for under £500, Audio Technica’s introduction of the splendid AT-LP3 (above) has compelled us to dish out a separate prize in an under-£200 category.

With built-in phono stage and fully automatic tonearm, it is a most welcome alternative to those all-in-one clamshell decks that seek to destroy your vinyl collection (both sonically and physically), and delivers tremendous performance in return for minimal effort or financial outlay.

Along with the Planar 1, Rega keeps another of its Awards from last year with the combination of Planar 3/Elys 2, as well as triumphing in a new category for turntables priced at £1200 and above. The Planar 6/Ania (above) shares the sonic character of those aforementioned Rega decks, but builds on their talents in every respect.

Consider the fearsome talents of the Clearaudio Concept, our highest-priced winner since 2014, and you’ll understand just how good the Planar 6/Ania needed to be in order to justify this new category.

For its own part, the Concept was never really in danger of relinquishing its title: a grand is no meagre sum for any hi-fi component, but the level of detail and musicality emitted by this Clearaudio gem belies even that hefty price tag, and still with (almost) enough change for a pint with which to enjoy it.

Our final category, USB turntables, remains - though this year the Audio Technica AT-LP5 must relinquish its Award as the Sony PS-HX500 tumbles in price to £280. Not half-bad for anyone wanting to rip their LP collection in hi-res and enjoy a good record player at the same time.

Keep your eyes peeled on 15 November to find out which of these outstanding decks leaves our Awards ceremony as Product of the Year.