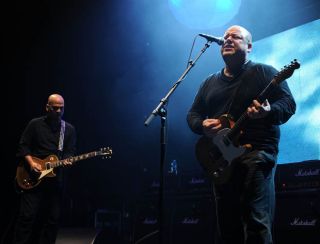 In truth, there aren’t many bands who call it a day at the right time. There are fewer still who know when to leave well enough alone, who understand the concepts of legend and legacy. Even a band as near-perfect as Pixies (who, back in the day, enjoyed the sort of critical traction that could pull a planet out of orbit) couldn’t get it done without sticking out a patchily so-so final album. And now, after the most tentative and protracted comeback in the history of popular(ish) music, Pixies have delivered their first album in 23 years.

For the uninitiated, Pixies built a reputation based on three violent, thrillingly visceral and menacing albums (1988’s Surfer Rosa, 1989’s Doolittle and Bossanova from 1990). Each was leavened with some sweetly melodic surfadelic pop’n’roll, but fundamentally Pixies made a dynamic, biblically coruscating indie-rock noise while a fat, bald man either screamed about incest and amputation or crooned about honeyed surfer girls. No matter how hard bands tried (and, from Nirvana on down, they tried), no one attacked it like Pixies.

Pixies got fully back into gear in late 2013, releasing three four-track EPs in short order after a decade of occasional download-only songs, some fairly consistent touring, and the departure of both original bassist Kim Deal and her replacement. Indie Cindy is those three EPs rejigged.

Produced by Gil Norton (the producer of Doolittle and Bossanova as well as 1991’s ho-hum swansong Trompe Le Monde), Indie Cindy cuts an implacable swathe, like a band really trying their hardest to sound like Pixies.

On the likes of What Goes Boom, Silver Snail or Blue Eyed Hexe Pixies demonstrate a sort of relentless battleship mentality, where every punch is an uppercut and every chord is a power-chord. There’s the same sort of muscle-bound mass even when the band attempt a little light and shade in Greens And Blues or Ring The Bells (the latter of which sounds uncomfortably and inexplicably like The Shins).

That aside, there’s little new or unexpected about Indie Cindy - it sounds as you’d predict it might no matter whether Pixies had enjoyed a two-decade sabbatical or had been putting out an album a year since 1991. It’s loud, dense, abrasive and rocking with a capital ‘R’. Guitars crunch and squeal, bass throbs, drums pound oppressively and the larynx shreds itself gamely. Does it add to the legend/legacy of Pixies? Not all that much.

- CD: One disc/12 tracks, or two discs including a 13-track live performance