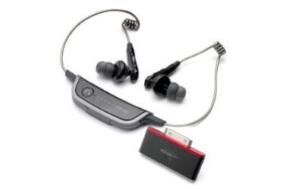 In addition, an optional receiver can be used for wireless transmission between an Apple player and a conventional iPod dock.

The company says that 'The S5+ operates in the 2.4Ghz band minimising drop out due to other radio sources such as WiFi and Bluetooth. A Kleer radio channel occupies only 3MHz of spectrum, allowing 16 such channels across the 2.4GHz ISM band.

'Channel switching is accomplished in less than 800 micro-secs. Result, no drop-outs on music and no interference.'

The Opera S5+ speakers come complete with a mini-USB cable for charging, and a choice of three soft flex and double flange sleeves for the earbuds.