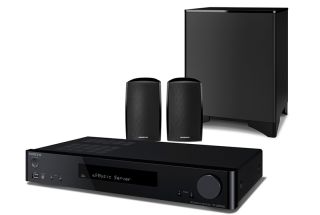 The LS5200 is a 2.1-channel home cinema system comprising a slim and compact main unit, satellite speakers and subwoofer. The other two new products are the TX-L20D network stereo receiver and the 5.1-channel TX-L50 network AV receiver, which can be used for music and movies.

All three models have built-in support for AirPlay, Spotify Connect, Google Cast and wi-fi, meaning you’re not short of options when it comes to streaming audio content. Onkyo has also thrown Bluetooth and internet radio support in for good measure and everything can be controlled via a companion control app.

The LS5200 delivers 2 x 85W of amplification to the supplied speakers, with phase-matching technology guaranteeing a "cohesive stereo image”, according to Onkyo. The SKM-648 satellites feature an 8cm cone woofer and a 25mm balanced dome tweeter, while the SKW-B50 wireless sub has a 16cm downward firing cone.

The LS5200 supports HDCP 2.2 through its single HDMI input, which means it can handle 4K Ultra HD signals from streaming boxes and Ultra HD Blu-ray players. DTS-HD Master Audio and Dolby TrueHD soundtracks can be decoded, and Onkyo has included a number of DSP listening modes to alter sound settings.

Inputs include two analogue, one each of digital optical and coaxial, and a moving magnet phono input. A USB Type A port can be found on the front alongside a 3.5mm headphone out.

The TX-L20D network stereo receiver and TX-L50 network AV receiver have similar specifications to the LS5200, but the speakers aren't supplied.

The two models differ in the number of speaker outputs: the L20D is a 2.1-channel system, while the L50 can support a full 5.1 surround-sound system.