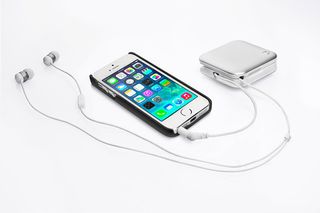 Looking for a new pair of in-ear headphones? Not convinced about Bluetooth buds but don't want the hassle of tangling wires? Nytro Labs has introduced a new product that might be of interest.

The US-based firm has launched Spin: retractable headphones, which it describes as "frustration-free, in-ear headphones" that will "simplify and improve the headset experience".

A crowdfunding campaign is live on Kickstarter to raise $125,000 (£75,000) to bring Spin to market, with shipping of the finished buds due in November.

What is Spin? It's a patent-pending set of headphones that feature a dual-spool retractable design, housed in a lightweight aluminium unit inspired by Apple's EarPods case.

The retractable system has been engineered by Nytro Labs in-house, with the dual-spool element managing the headset cable and 3.5mm jack cable separately – rather than at the same time.

Sound is transferred via spring contacts and a printed circuit board to ensure the quality of a phone call or your music remains the same, whether Spin is retracting or is locked in place.

Meanwhile, the 9.2mm drivers have been custom-tuned to "deliver a balanced sound experience", while an omni-directional microphone with noise reduction has been installed for phone calls.

Nytro Labs co-founder Kevin Brennan said: " You would think with how far we've come with smartphones and the explosive growth in the audio space that this wouldn't be an issue.

"For some, Bluetooth is an answer, but we prefer the reliability and ease of a wired headset, so we set out to solve the tangle problem in an elegant way," Brennan added.

If the Kickstarter crowdfunding campaign is a success, Nytro Labs will prepare Spin for commercial production by finalising the design and mechanism, confirm suppliers and carry out testing.

Nytro Labs isn't the first company this year to use Kickstarter in a bid to bring a fresh product to the AV market.

Recently, Neil Young's PonoMusic and Musaic's multi-room music system have found success through Kickstarter – and Nytro Labs will be hoping for a similar result with its campaign.

For more information on Spin and to contribute, visit Kickstarter.