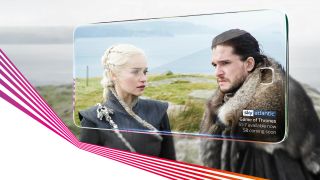 Sky has announced a new version of its Sky Mobile Watch feature, which now gives Sky Mobile customers unlimited streaming of content on any Sky app (including Sky Go, Sky Kids, Sky Sports and Sky Cinema) without eating into any of their mobile data allowance.

Sky customers can stream anything that comes under their subscription through the Sky mobile apps in the UK and the EU. Previously, Watch only allowed Sky users to download shows to a smartphone or tablet to watch offline.

Sky customers without a TV package subscription can still benefit, with them able to stream Sky content that doesn’t require a subscription, such as Sky News.

Sky says an hour-long episode of Game of Thrones equates to 1.4GB, which would typically cost just under £15 in data (based on the figures by Future Digital Media that 1GB of data is valued at £9.27).

So essentially, avid smartphone streamers of Sky content who normally rack up data usage outside of their allowance should now save a lot of money.