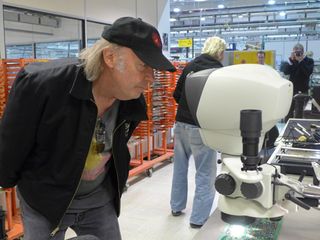 Posting on the Pono Community site (via The Verge), Young described XStream as an "adaptive streaming service that changes with available bandwidth". According to Young, this will help differentiate it from the raft of services currently dominating the market, such as Spotify, Tidal and Apple Music.

"Unlike other streaming services that are limited to playing at a single low or moderate resolution, XStream plays at the highest quality your network condition allows at that moment and adapts as the network conditions change," Young wrote. "It's a single high-resolution bit-perfect file that essentially compresses as needed."

This confirms what Young said back in December, when he revealed the PonoMusic store - Pono's ill-fated download shop - would "re-emerge as a streaming service". However, there's no word on the "hi-res download store" Young also mentioned in that interview.

The project is still a bit light on specifics - there's no word on when the service will launch, or how much it will cost - though Young insists "there will be no premium price". Young says an official announcement will follow "very soon", so watch this space.

The post is remarkably candid about the difficulties Young has faced in bringing his hi-res offering to market. In 2016, the PonoMusic store stopped operating after its music provider Omnifone went into administration. Pono then partnered with 7digital with a view to streaming music instead of offering it for download. He also reveals how hard it has been raising the necessary funds to implement these changes.

Young wasn't always such a fan of streaming. A couple of years ago, he claimed it had the "worst [sound] quality in the history of broadcasting".

XStream will face stiff competition from the big boys of the streaming world. We'll have to wait and see if it can carve out a niche for itself, and persuade audiophiles that it, and not Tidal, is the best place to get their hi-res fix. But you've got to admire Young's dedication to the cause.