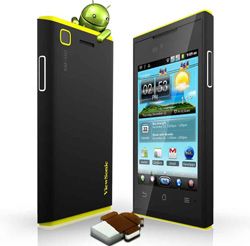 The three new ViewPhone handsets run on the Android operating system, with the ViewPhone 4s and 5e both sporting the latest Android 4.0 Ice Cream Sandwich OS.

As well as being a dual-SIM mobile, the ViewPhone 5e is the first 5in multi-touch display to run the latest Android OS.

The flagship, larger screen ViewSonic ViewPhone 5e mobile is set to retail for sub-£390 in Q3 of 2012.

The ViewPhone 4s meanwhile is a 3.5in screen mobile, also uses Android 4.0 Ice Cream Sandwich and has a 960 x 640 resolution screen, plus all the normal smartphone features such as a 5MP camera and music and video playback.

And of course that dual-SIM functionality. It's is set to cost around £325 and is due out in Q2.

ViewSonic's ViewPhone 4e, also newly launched at this year's Mobile World Congress, is the entry-level dual-SIM smartphone, with a 3.5in display, Android 2.3 Gingerbread, a 3MP camera and an integrated FM radio.

The dual-SIM functionality allows users to choose different pricing and text plans for each SIM card, one for cheaper international calls for example, or simply to seperate work from personal use.

"ViewSonic's Dual-SIM smartphones are the ideal solution for corporate markets, frequent travellers, those studying abroad or wanting to keep in touch with friends and family overseas," said Brian Wei, Head of Product Marketing for ViewSonic Europe.

"We have designed these phones with the users in mind so while they are sophisticated and packed with features, they are also a simple and effective way to communicate."