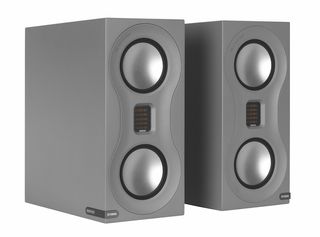 A month after launching its six-strong Monitor speaker series, Monitor Audio has thrown the spotlight on just one pair of speakers – the Studios.

At £1000 a pair, the Studios should sit in similar territory to the company’s Gold 50 (£950) and Gold 1000 (£1250) standmounters. But, having borrowed technology from Monitor Audio’s flagship speakers, it seems the aspirations lie higher up the range.

Beneath the honeycomb tweeter, dual 10cm drivers use the same magnetic design and materials as the ones in the brand’s flagship Platinum PL500 II floorstander (£15,000).

The metallic-silver RDT II cones with C-CAM technology (Ceramic-Coated Aluminium/Magnesium) are housed in a cast polymer chassis for improved rigidity and damping, while a MPD (Micro Pleated Diaphragm) transducer has been designed to provide better articulation due to the low mass diaphragm.