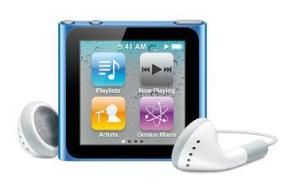 Lots of speculation surrounding the event, from new 'Touch' versions of the nano to a smaller mini-iPad and perhaps even a new streaming music service.

The Apple Stores are down, so clearly something's on the way – keep checking back and we'll report the event as it happens.

18.01 Steve Jobs on stage in SF to nerdy applause. Introduces his 'partner in crime' Steve Wozniak; now he's talking about Apple Stores, after saying 'we have a lot of cool stuff to show you'.

18.03 Talking about new retail stores in Paris, Shanghai, and London...

18.06 Over half of all Mac buyers are new customers.

18.16 'All about iPad': wireless printing, via Print Center.

18.17 And AirPlay: AirTunes to be renamed as AirPlay, will be able to stream video and audio over Wi-Fi

18.19 Jobs is playing Jack Johnson from Pandora while demonstrating multitasking.

18.20 That was just the starter, Jobs says. Now the main course: iPods. 'Some cool new music products we have for the holidays'. That's Christmas to those of us in London...

18.21 Biggest line-up change ever. New designs across the range.

18.26 New nano has multitouch screen. It's just like a miniature Touch. 46% smaller and 42% lighter than current nano; comes with a clip; VoiceOver; FM radio.

And now the iPod Touch..

18.32 Jobs: Touch has been a remarkable product, most popular iPod, also world's No 1 portable game player.

18.45 Will allow social music networking among a circle of friends – you can see what others have bought/listened to, and post opinions and thoughts on their choices, as well as pictures.

18.47 Users can decide who follows them, so you limit it to your circle of friends, or artists can allow anyone to follow them if they wish.

18.52 Users want Hollywood movies and TV, they want HD not amateur stuff, they want to play less and they don't want a computer on their TV, Jobs says

18.55 So, the new Apple TV. A quarter of the size of the current model 'about the size of a hockey puck'.

18.58 ABC and Fox already signed up in the States, 99c a show, commercial-free. Apple expects others to 'see the light'. Purely a rental device – click on a show, and you can rent it to watch. Or first-run movies, in HD, for $4.99.

19.07 Using AirPlay, you can stream content from iPad to the Apple TV unit.

19.11 Jobs now rounding up in his usual 'so here's what we talked about today' style...

19.13 Introduces 'one of our favourite artists' – Chris Martin. Yes, him out of Coldplay. The one with the daughter named Apple.

Full coverage with pictures to follow just as soon as we've hotfooted it home!