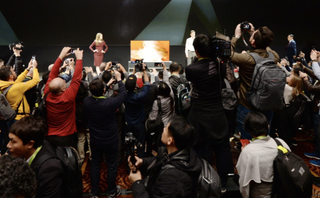 At the world's greatest annual tech show, CES, headlines regarding LG's groundbreaking rollable Signature OLED TV R flatscreen dominated last year. The LG OLED65R9 occupied the most column space thanks to its 65-inch screen that fully retracted into its aluminium base, which also doubled as a 4.2-channel, 100W Dolby Atmos soundbar.

But Las Vegas is never short of a high roller. This year, LG has decided to cash in on that concept quite literally. Its newest rollable offering takes up no floor space whatsover, designed as it is to unfurl from your ceiling and to ascend tidily back up into its casing when not in use.

LG will also bring a selection of other new displays to the show, including three designed specifically for in-flight entertainment: a series of 55-inch OLED video walls for aeroplane cabins, a 55-inch Full HD Transparent OLED display that doubles as an aisle partition and a 65-inch UHD Bendable OLED screen that's specifically intended for first class and malleable at both ends.

Back to those of us with our feet firmly planted on solid ground, there's an 88-inch 8K Cinematic Sound OLED display with an 11.2 channel system, and a 77-inch UHD Film Cinematic Sound plus wafer-thin Wallpaper OLED screen. The interesting thing to note here is that the sound systems are embedded into both of these displays.

In the automotive sphere, LG will likely present its Plastic OLED displays in a variety of sizes, and in the commercial or business sector, the firm's interactive in-TOUCH displays will also be shown off – including an 86-inch LCD screen that acts as an electronic whiteboard and features the ability to read four pens simultaneously.

LG has previously hinted at a few non-display items it'll bring to CES 2020, including four premium soundbars with Dolby Atmos and DTS:X.

Further details and spec sheets are still thin on the ground, but with CES kicking off in just five days, there's not long to wait – and we'll have a ringside seat to tell all as the action gets underway.

Read all our LG TV reviews