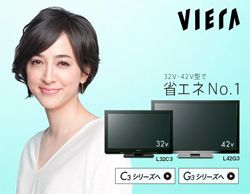 UPDATE: Panasonic is planning to shift up to half of the capacity at its main LCD panel plant to the manufacture of displays for tablet devices, and will realign the rest of its production to concentrate on large-screen TV panels.

Following the lead of Sharp, which has switched production at its Kameyama factory to tablet and smartphone panels, Panasonic is set to start making small and midsize displays at its main LCD plant, the state-of-the-art Himeji factory (above).

It invested over Y210bn (£1.75bn) to build the plant, which started production in April last year, and has capacity equivalent to 810,000 32in TV panels a month. Now it aims to turn over half of that capacity to smaller-device panels, which are much more profitable than those for TVs.

It's a market which Panasonic left back in 2009: it had previously merged its operations in the small-panel field with Toshiba's in 2002, and sold out its stake to its partner seven years later.

Panasonic will also move the focus of its LCD panel production to larger TV displays, of 50in and above. Again this is a more profitable sector than the mass-market sector, which has seen massive price erosion, oversupply and competition from other countries.

The prices of mid-market TVs, and thus the display panels they use, has also been pushed down on the domestic Japanese market by government eco-incentives run over last winter and spring. When the incentive scheme ended and prices rose, consumers used to the lower prices all but stopped buying TVs, with sales numbers halving virtually overnight.

Panasonic is set to become the latest Japanese consumer electronics company to slash TV production, as it faces huge losses for this financial year.

Three of its six TV panel plants will cease production – including one complete shutdown at its giant Amagasaki plasma facility (above) – with the loss of at least 1000 jobs through early retirement, and the company is in talks to sell of one of its LCD operations to a consortium including rivals Hitachi, Sony and Toshiba.

Reports in the Japanese financial press say that the company, which had expected to turn a profit this year, is now facing losses in the region of Y120bn, or around £1bn, largely as a result of asset write-offs related to its struggling TV business.

Its TV business – one of the few still making TVs from start to finish, rather than buying in major components from external suppliers – has been in the red since 2008, despite total flatscreen sales of some 20m units in the last financial year, and revenues approaching Y1tn (around £8.3bn).

As a result of these woes, Panasonic is putting in place plans to end plasma panel production at its No.3 plant at Amagasaki by the end of this financial year.

The world's largest plasma panel factory, Amagasaki No.3 was completed just two years ago, and can make the equivalent of 330,000 42in panels a month. It currently produces panels from 42in right up to those for the company's monster 150in TV.

Production will also be cut at the No.2 plant on the same site, the reports say, effectively reducing domestic plasma panel production to just one factory, Amagasaki No.1.

Click here for our report from Panasonic Amagasaki earlier this year

Production at Panasonic's other plasma panel plant, in Shanghai, China, seems to be unaffected by the move.

One of the company's two LCD plants is also set for the chop: its newest facility, at Himeji, will continue, but the older Mobara facility will no longer make Panasonic LCD panels. Instead, the company is said to be in talks to sell off Mobara to a consortium comprising the Innovation Corporation of Japan, Hitachi. Sony and Toshiba.

Previous reports have suggested such a move might be the cause of some tension between the prospective partners in this consortium, with Hitachi suggesting one strategy would be to buy one of Panasonic's plants and turn it over to the manufacture of much more profitable small-size LCD panels, such as those used in tablet devices.

That's thought not to have found favour with Toshiba, which already makes such panels for Apple products, and had planned its own factory to produce small-screen displays.

The Panasonic move is symptomatic of the tough times currently being experienced by the Japanese TV industry, not least due to a slump in sales on the domestic market, which accounts for a large proportion of total sales for some companies.

The strength of the Japanese yen on world currency markets is also making its products expensive in export markets, and there's increased competition from less expensive TVs made in other countries, both on world markets and back home in Japan. The major Korean manufacturers are keen to increase their market share in Japan, which would have been unthinkable not so long ago.

Less than two months ago Panasonic president Fumio Ohtsubo (left) said 'We have no intention of quitting the TV business', but his other comments at that time may have hinted at the strategy the company now seems set to adopt.

He said then that 'We operated on the assumption that we would do fine if we increased output, but it is now clear that making a large number of TVs won't guarantee us a profit.

'We are now considering changing the nature of the business by focusing on products that can beat the competition rather than output volume, for example.'

With the news that plants are set to close, consolidate or be sold, that concept of class-leading products in terms of technology, rather than sheer sales numbers, appears to be coming to fruition.

Click here for our report from Panasonic's latest LCD factory, at Himeji, earlier this year