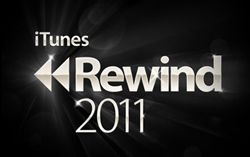 The top films include sales and rentals, and mixed releases from 2011 with 2010. Inception topped the chart, followed by Paul, Limitless, Harry Potter and the Deathly Hallows and The Social Network.

The Inbetweeners was the best-selling TV series, followed by Downton Abbey, Top Gear and Fawlty Towers, showing the enduring appeal of classic content in the digital domain.

When it comes to buying individual episodes, it seems we prefer an easier watch, with comedy such as Come Fly With Me, South Park and Family Guy dominating the top 10.

Apps are divided in to three categories: paid, free and grossing. Games – notably Tap Zoo and Angry Birds – dominated, though TuneIn Radio Pro, Facebook, Twitter and the BBC News app all figured on the lists.

Head to the iTunes Store and click on Rewind 2011 to see the lists in full, plus Apple's own favourite content, which included photography app Instagram as best app, Frozen Planet as best HD programme and Senna as best documentary.