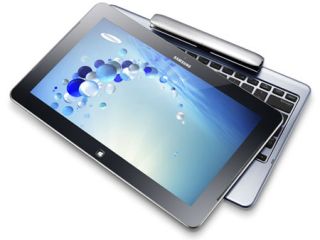 Samsung has unveiled a range of brand-new devices based on the Windows 8 and Windows Phone 8 platforms for PCs, tablets and smartphones.

They all come under the 'Ativ' brand name, Ativ being the reverse spelling of Vita meaning 'life' in Latin. The aim, says Samsung, is that all the devices should "make everyone's life easier".

The Samsung Ativ S (right) is the first Windows 8 Phone handset ever announced, with a 1.5GHz dual-core processor and 4.8-inch Super AMOLED screen.

Then there’s the Ativ Tab, a 10.1-inch Windows RT tablet weighing in at 570g and 8.9mm thick. It boots up “instantly” and comes with Microsoft Office Home and Student 2013 RT preview.

For those who want a little more flexibility, the two Ativ Smart PCs are essentially a tablet with a removeable keyboard dock.

Both the Ativ Smart PC and Smart PC Pro are 11.6-inch with the full Windows 8 OS and a Note-style S Pen stylus. The Pro features an Intel Core i5 while its little brother is powered by an Atom. They feature 8 and 13.5 hours of battery life respectively.