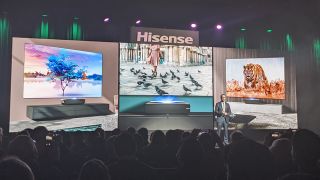 Hisense was predictably bullish in its CES 2020 press conference, announcing a host of new and not-quite-so-new TVs as part of its plan to become the number two global TV brand (it's already the fastest-growing TV brand in the US).

And its betting big on laser TV – claiming, somewhat over-confidently that laser TV now "dominates" CES. We're not so sure about that but we are intrigued to see more of the new Hisense 70-inch L5 Series, the world's first self-rising laser TV. It's coming to the US for $5999.

The TV-meets-projector features a 100-inch ambient light rejecting screen, integrated dbx-tv speakers and boasts 2,600 lumens. It has the Android TV smart platform, too.

It's joined by the H9G, which delivers up to 180 local dimming zones and 1000-nits peak brightness, a 120hz native panel and Far Field Voice Control.

Further details, release dates and prices were thin on the ground but once the main show floor opens tomorrow we should be able to find out more.