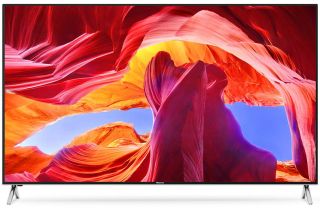 After releasing 4K TVs in flat and curved varieties to challenge the big name brands, Hisense has now launched a 75in screen that supports 4K HDR. We’ve seen only one 75in 4K HDR screen so far at What Hi-Fi? - the Sony 75XD9405 - and it’s a visual treat. The Sony, though, costs £5000; Hisense’s version is half that price at an impressive £2500.

And for that price, claims Hisense, the 75ML7900 comes with everything you’d expect from the modern TV. BBC iPlayer, Amazon Video and Netflix are preinstalled and ready to deliver 4K HDR content. Anyview Cast and Anyview Stream services are also on-board, allowing you to share content from mobile devices and computers to the screen.

Connections include four HDMI inputs, two of which support HDMI 2.0 and HDCP 2.2, so you can connect 4K sources such as Panasonic’s DMP-UB900. You’re also given three USB inputs, a digital optical output and headphone output.

We're due to get our hands on one in four to six weeks, and can't wait to compare the Hisense with its amazing Sony counterpart.