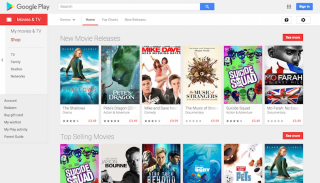 Google has announced that it is joining Netflix and Amazon Prime Instant Video as a provider of Ultra HD content. It said, via a blog post, that 125 4K films and TV shows are being made available on its Google Play store. Titles include Captain Phillips, Star Trek Beyond and The Secret Life of Pets.

MORE: The 26 best 4K TV shows, films and sport to watch this Christmas

Customers in the US and Canada will be able to purchase or rent 4K movies on their Android devices and stream them through the Chromecast Ultra, Sony Bravia Android TV, or the Xiaomi Mi Box 3.

The Chromecast Ultra went on sale in November, and is the first 4K streamer to support both Dolby Vision and HDR.

If you live outside North America, however, you're not going to be able to get your hands on these 4K movies any time soon. Google has said it hopes to bring 4K to the UK in the near future, but has no specific timeline for doing so.

Alongside the 4K compatability, Google has also made its films available in its Daydream VR - and the Google Play Movies & TV app is now available on 2016 model Samsung Smart TVs.