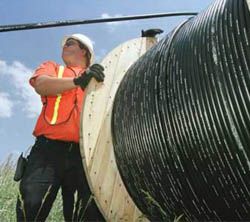 Fujitsu has announced a collaboration with Virgin Media, TalkTalk and Cisco that will see the company bring superfast broadband to 5 million rural households.

The plan will use BT's existing infrastructure, recently opened-up by Ofcom to other providers, in order to deliver speeds of 1Gbps to rural homes.

Fujitsu and Cisco will enable the wholsale network, which will then be open to all ISPs, with Virgin Media and TalkTalk already committed to using the network.

The network will run directly to homes in the vast number of cases, making it "one gigabit (1Gbps) symmetric capable from day one with potential to go to 10Gbps and beyond".

The plans are reliant on Fujitsu securing funding from the UK government that has been earmarked for the roll-out of broadband across the UK.

Once this is secured, Fujitsu has told us the network could be up and running in 18 months, with users accessing broadband in 2012.

The news comes after Ofcom ordered BT to share its existing infrastructure to speed the spread of superfast broadband.