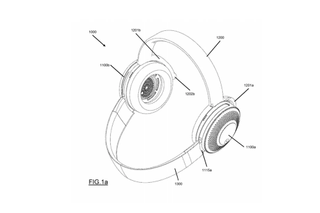 Dyson, a British company best-known for its high end vacuum cleaners, has applied for a patent to manufacture a new pair of headphones with a built-in air purifier. The application, originally filed with the UK’s Intellectual Property Office in July 2019 but only published now, describes a pair of headphones with air filters built into its earcups. A total of 20 diagrams included in the application depict a band that sits across the wearer’s mouth to furnish them with clean air. The band can be folded away when not in use.

As spotted by Bloomberg, Dyson’s patent application explains that motors built into both earcups will be connected to fan-like propellers measuring 35-40mm. These will spin at around 12,000rpm in order to draw in approximately 1.4L of air per second. This air will then pass through a filter. Whether these fans will produce noise that will affect the sound quality – after all, it's a set of headphones – remains to be seen.

The product, developed by Dyson Ltd. engineers, seems to house nozzles on each side of the band which will jet filtered oxygen from the earcups, via a perforated air vent in the middle of the band, to the user.

With more people choosing to wear face masks to combat air pollution and the threat of airborne viruses, we can see how a set of headphones that also promise to purify the air around you could hold some appeal.

Dyson's patent application states that “air pollution is an increasing problem and a variety of air pollutants have known or suspected harmful effects on human health.”

It's worth saying that just because Dyson has filed for the patent, it doesn’t necessarily mean that we'll all be donning air purifying cans for our commute home any time soon. According to a Bloomberg report from 2018, the company has been planning the headphones for some time.

Still, the recent publication of its application could mean Dyson is genuinely serious about the idea. As always, when we know, you'll know...