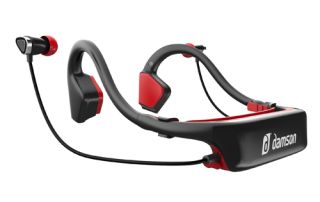 A pair of wireless headphones that create sound by sending vibrations through the temporal bone straight to the inner ear? That's the latest product to emerge from British audio firm Damson.

You might remember we first caught sight of these "revolutionary" new Headbones at CES 2014 in Las Vegas earlier this year, and it appears they turned quite a few heads on the showfloor.

It had been expected that Damson would launch Headbones later this year, but the "global interest" shown at CES brought things forward. And now here's your chance to make them a reality.

Damson has now taken to Kickstarter – the crowdfunding platform – in an attempt to raise £50,000 that will "make this great, unique, product a reality that will ship and be enjoyed in 2014".

The design of Headphones delivers "top-quality audio" to the inner ear without blocking ear canals so you'll still be able to hear the environment around you while you listen to your music.

Incisor Diffusion Technology found in Damson's Twist and Jet wireless speakers has found its way into the Headphones, which is compatible with any Bluetooth-enabled portable device.

Headphones can be charged using a Micro USB cable and there will be two versions – one that sits in front of the ear and the other that rests the speaker just behind the ear.

If you get in early with the Kickstarter campaign, a pledge of under £100 will secure a pair of the new Headbones – either a standard pair or a discounted pair of the carbon fibre finish model.

"It’s a great opportunity for us to get a really innovative new tech, which we believe will really disrupt the market, into the hands of early adopters and dedicated Damson fans much earlier than originally planned."

Just as James Talbot alluded to, we have seen some striking AV winners that have become a reality with the help of Kickstarter supporters and we're barely halfway through the year.

LH Labs used the crowdfunding platform to bring its Geek Out DAC to the market, raising more than $300,000 and securing over 2000 orders having originally set out to secure $28,000.

And then there's the Dash – the "world's first" smart wireless headphones from Munich-based Bragi that secured nearly $3.4 million, a considerable success given its $260,000 target.

Another outstanding Kickstarter success has been Neil Young's high-res PonoMusic, which proved such a hit with $6.2 million pledged that demand is likely to exceed initial supplies.