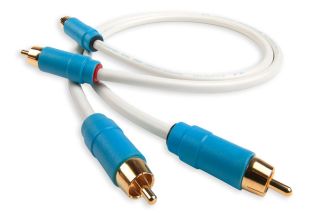 The Chord Company's Tuned ARAY technology was originally designed for its flagship Sarum cable range, but the cable tech has now been introduced across a wider range of products.

Tuned ARAY technology is able to produce greater levels of transparency, detail, coherence and musical involvement, claims The Chord Company, and the C-line analogue RCA cable is now the most affordable interconnect to benefit from elements of this technology.

The C-line interconnect feature oxygen-free copper conductors with "high-performance shielding", along with durable "over-moulded strain-relief" for the plug terminations.

The Chord Company C-line interconnect is available now at £45 for 1m and £35 for the 0.5m variant.