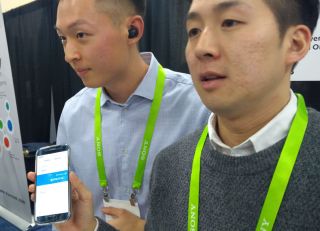 The Google Pixel Buds made headlines last year thanks to their ability to seemingly translate speech on the fly. The headphones used Google Assistant and a Google Pixel 2 phone to translate foreign languages straight into your earlobes - 'the babel fish earbuds'.

The Mars earphones, on show at CES 2018, promise to take it a step further, working with any Android or iOS phone, and enabling person-to-person real-time translation. Thanks to the two separate wireless earbuds, one user can wear one earbud, one person the other, and using an app on a smartphone you can translate a previously disjointed conversation.

The tech inside is the Clova AI assistant and Naver Papago translation platform - and they will soon incorporate Google Translate. English, Chinese, Korean and Spanish are currently supported, with up to 40 languages promised to be on the way. Bluetooth connects the buds to your phone, and the earbuds to each other.

The earbuds can of course play music, too, offer noise-cancelling techonology and can take voice calls. They promise three hours of battery life and come with a charging case.

There's no official price as yet, but the Mars earbuds are scheduled for release in the summer.