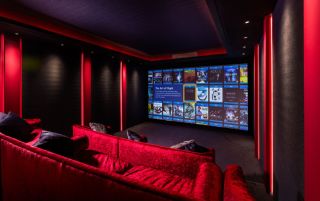 The world of high-end home cinema installations waits for no man and, in an effort to deliver a top-tier custom install experience to consumers with cash to blow on a cinema room, one company thinks it's set a new benchmark.

This 10-seat home cinema room features a 9.2.4. Dolby Atmos surround system, a 4K laser projector and a 3.6 x 2-metre screen, all customised within an inch of its life to deliver the best possible AV experience.

Sadly, unless you're in the market for a new room, you can't go round for movie night. The room has been built by home automation company Cornflake in an effort to showcase just what's available for those who want the ultimate movie and music room - and have the money to spend on it.

It's the first residential project in the UK to use a fully-active, Meyer Sound speaker system. A relatively unknown name in the consumer market, it's seen as the 'go-to' brand in pro audio circles, and can be found in Hollywood movie rooms and live music venues around the world.

MORE: Behind the scenes with Dolby Atmos at the Ministry of Sound

The £13,000 screen is an acoustically-transparent design by Display Technologies, which is capable of automatically and almost silently adjusting to the aspect ratio of any film. Pictures are then delivered by the JVC DLA-Z1 4K laser projector, fed by a Kaleidescape movie server and a Panasonic Ultra HD Blu-ray player.

It's all powered by the Trinnov Altitude 32 processor, a high-end receiver with support for Atmos, DTS:X and Auro-3D. Naturally the system - including the lights - can be controled on a phone or tablet.

CATS Packs acoustic treatment, which can fine-tune a room using panels just 50mm thin, help to perfect the sound while still delivering a living-room rather than demo-room design. And there are some natty sofas, too.

Naturally, this isn't the only way to get yourself a seriously plush home cinema, and one or two companies might question the company's "best private home cinema" claim. The IMAX Private Theatre project, for example, comes with a starting price of nearly £2 million, should you want something more akin to a commerical cinema in your spare room.

Tempted to take the plunge? You can see more on the Cornflake website.