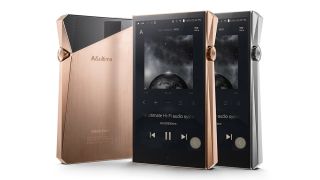 Hot on the heels of its Kann Cube player announcement last month, A&K has revealed an all-new flagship player.

The A&ultima SP2000 sits at the top of the brand’s flagship A&ultima line above the SP1000, and utilises two top-of-the-line Asahi Kasei DACs (AKM AK4499EQ) in a dual-mono configuration.

It’s the first A&K player to support 32-bit/768kHz PCM and native DSD512 files, and also the first to use separate audio channels between the unbalanced and balanced outputs, through which impressive levels of power - 3Vrms and 6Vrms respectively - are achievable.

Elsewhere is an octa-core CPU, a whopping 512GB of internal memory (the SP1000 'only' has 256GB), MQA support (pending final certification), and dual-band wi-fi with a stereo antenna for improved network stability during music streaming.

The A&ultima SP2000 is very much cut from the same cloth as its siblings where aesthetics go, available in either stainless steel or copper chassis, with a 5in touchscreen and a uniquely patterned volume/power wheel. It will be available in July for £2999/$3500.

Those attending High End Munich this week will have the opportunity to listen to NativeDSD Music’s specially produced 'NativeDSD Presents: 5 Tracks in DSD 512' sampler through the SP2000.

Then there's the SP1000 AMP (pictured above), a new amplifier module for the SP100, designed to provide more power to drive more demanding headphones.

The module, which acts as a dock for the SP1000 player to keep the form and control seamless and integrated, is capable of delivering high-gain balanced 10 Vrms and unbalanced 6.2 Vrms power output. Its 3,700mA battery supports 9 hours of music playback from a single charge, too. The SP1000 AMP is priced $800 (UK pricing tbc) and will be available in June.

Astell & Kern's new high-end in-ears (pictured above), meanwhile, see the company expand its partnership with Beyerdynamic. The AKT9iE IEMs - successors to the AKT8iEs - are optimised for use with the company's portable music players, and feature a newly developed acoustic vent port and filter designed to improve bass and treble performance, as well as a pure silver and OCC hybrid cable.