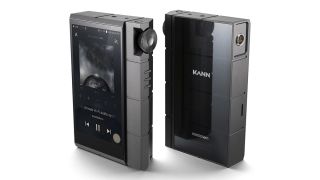 Astell & Kern has consistently occupied our portable music player Award pages over the past years. Its Kann player has twice been recognised as being the ‘best portable music player over £750’ currently on the market, demonstrating that such a spend is more than worthwhile in a smartphone-centric era for those wanting excellent sound from a portable device.

We’re pleased, then, that Astell & Kern is building on its Kann range by introducing a second model. Today at the Tokyo Fujiya Avic Spring Headphone Festival, the US brand has launched the Kann Cube.

The Astell & Kern Kann Cube is capable of twice the power output of the Kann through its balanced connection (12Vrms vs 7Vrms), with a new amplifier design that ensures that higher power capability doesn’t compromise on low distortion levels. Users can select low, mid or high gain modes depending on the headphones connected.

Building on the Kann’s internals and specs elsewhere too, the Kann Cube utilises two 8-channel ESS Sabre ES9038PRO DACs in a dual-mono configuration for superior performance, and features the latest quad-core processor for greater computing capability.

Onboard is 128GB of internal memory (trumping the Kann's 64GB, and expandable by a microSD card), a 7400mAh battery (up from the Kann's 6200mAh) promising nine hours of playback from a single charge, and file support for 32-bit/384kHz PCM and DSD256. Pending final testing and certification, the Kann Cube also supports MQA audio technology - both through downloaded files and the streaming of Tidal Masters.

Users can directly download Tidal and other music streaming services such as Amazon Music, Spotify, Qobuz and Deezer onto the player. With supported apps, offline music can also be downloaded and stored.

In addition to 3.5mm headphone outputs, a 5-pin mini XLR socket is onboard for easier hook-up to a hi-fi system. Framing the 5in screen is a familiarly - and impressively - striking aluminium design.

As far as we know, and as indicated by the price discrepancies, the $1499/£tbc Kann Cube will join, as oppose to replace, the original Kann ($999/£649) next month. We hope to get first impressions in a fortnight's time at High End Munich 2019...