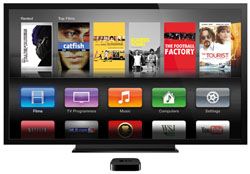 Apple is rumoured to be planning a set-top box that would combine on-demand iTunes content and live TV programmes.

Essentially an upated version of the existing Apple TV box, which only shows bought iTunes content, the set-top box would see Apple jostling for a more prominent position in the living-room.

The report in The Wall Street Journal suggests Apple would talk to cable operators in the US in order to offer traditional TV channels alongside Apple TV and movie content in the form of apps.

Apple's great rival Google recently announced Google Fiber TV in the US, which sees Google not only offering home broadband packages but also a broadband plus TV package, complete with a TiVo-esque set-top box.

An Apple TV set-top box would arguably be an alternative to the much-rumoured 'Apple iTV'.