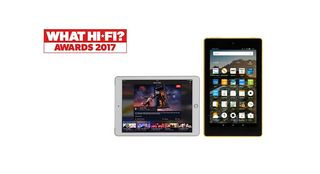 The smartphone and the tablet have become two essential tech products of the past decade. Doubling up as phones, computers, games consoles, TVs and, of course, music players, these are machines that do the lot.

The likes of Apple, LG, Google and Amazon have dominated these Awards categories in the past, and to an extent that remains the case.

“If it ain’t broke, don’t fix it” is the approach for the Amazon Fire 7 tablet (above). There’s very little to dislike about it – the OS is slightly sluggish, admittedly, and the speakers are pretty tinny but overall, and especially considering the price, it performs well.

Those looking for a budget smart-home controller, or just something to keep their kids amused, will find the Fire 7 more than meets their needs.

Apple has gone back to its roots with its latest iPad (top), simply naming it (ta-dah!) Apple iPad. Replacing the 2016 Award-winning iPad Air 2, the Apple iPad (2017) operates on a ‘more of the same, but better’ basis.

What it does, it does very well indeed. It’s lovely to use, its improved picture is perfect for watching TV shows and films on the go, and it still has that elegant and intuitive tablet experience we’ve come to expect from Apple.

No surprise Apple also has an entry in the smartphone category: the iPhone 8 Plus.

The 8 Plus (above) borrows many ideas from the 7 Plus but, with an improved screen, better camera, slicker performance and wireless charging, it’s a better experience all round. Even battery life is enviable – a rare boast for an iPhone.

Its audio isn’t a huge improvement, but still beats most of its hi-res-capable rivals, making the 8 Plus the smartphone to buy this year.