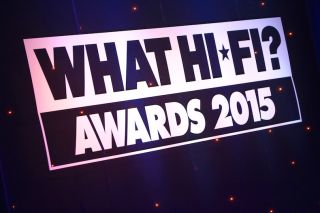 104 products took home Best Buy Awards at this year’s ceremony but there can only be one outright winner in each category. The Product of the Year represents the best performance-per-pound piece of kit in each section, and comes together to make the ultimate Christmas 2015 tech shopping list.

The following list of 26 products covers TVs, turntables, wireless speakers, headphones, DACs, stereo amps and much more besides, including two new categories for this year: portable music players and the Temptation Award, which represents the best in high-end tech.

Want to know more? Click through to read the reviews or head over to our Awards 2015 site for the full list of winners.

A fantastic picture, decent sound and incredibly easy to use, this Samsung TV has it all.

A second win in a row for this Q Acoustics soundbar. Not only has it been able to fend off the competition, it's had a price reduction in to the bargain.

It's a repeat win for B&W with the 685 S2 speakers, which once again proved to be more enjoyable and engaging than any other pairs of speakers that we've heard this year.

Panasonic has done what we thought was impossible, and taken Sony's crown for best Blu-ray player. This player delivers a stonkingly good picture for the money and throws in 4K upscaling too.

The wireless speaker market is always hotly contested, which makes the Addon T3 even more of a triumph.

The Y50s are a perfect example of style and substance done well, which is why they've won a Product of the Year Award for a second year running.

Sennheiser has had a great year with its Momentum range of headphones, but it's the in-ear model that really blew us away.

The iPad Air 2 is hands-down the best tablet on the market today, and the ultimate choice for bigger-than-smartphone-sized entertainment.

Bluesound already had the best-sounding multi-room system, but the Gen 2 has made it even better.

The CXA60 ticks all the boxes: great sound, good looks, digital inputs and high-res audio support. It's a brilliant success.

We're really starting to wonder if there'll ever be another turntable that can dethrone the RP3. If you're looking to get into vinyl, or want to replace an old deck, this is the one to buy.

Denon really does know how to make a micro system and the D-M40DAB sounds better than ever before.

We fell in love with the Mojo as soon as we heard it. It delivers much of the sound of the £1400 Hugo at a fraction of the price.

Denon's latest AV receiver delivers a wonderful articulated sound, has stacks of functionality and is future-proof for some years to come.

The Bronze B5 AV package looks good and sounds even better. It'll play nice with movie soundtracks as well as music, making it a truly versatile option.

Epson has triumphed for a second year with the TW7200. It delivers a truly immersive viewing experience and is the best option for big-screen entertainment.

Cyrus is another repeat winner in 2015 with the CDi. It's a hugely entertaining player that's better than anything else at this price.

The CXN is a stylish, feature-packed streamer that sounds great and is a joy to use. If you're in the market for a music streamer, look no further.

Roberts has won top honours again with the Stream 93i. It serves up a scintillating sound and provides some genuinely useful extras.

Sky's offering of TV, catch-up and on-demand content betters the competition. The box also delivers a superb HD picture and an intuitive interface.

The AK Jr won the first ever portable music player Award thanks to its incredible build quality and performance, all in a relatively affordable package.

This Chord speaker cable will help stitch together all the instruments in whatever piece you're listening to, resulting in better musicality and greater dynamics.

The iPhone may not be able to compete on paper due to its lesser specs, but in reality it can more than hold its own. Couple a good screen and great sound with a slick interface and it's easy to see why it's our champion once again.

The Temptation category is another new one for 2015 and the inaugural winner was the VPI Prime. Never have we heard such an impressive sound from a turntable at this price. A well deserved winner.

BBC's iPlayer walked home with the Product of the Year this year thanks to its vast array of content, easy to use interface and its availability on pretty much every platform.

No What Hi-Fi? Awards would be complete without you, the readers, having your say. The votes flooded in and the unanimous winner was the Naim Mu-so - and we won't argue. It's a tremendous wireless speaker that does a brilliant job of delivering hi-fi sound from one box.