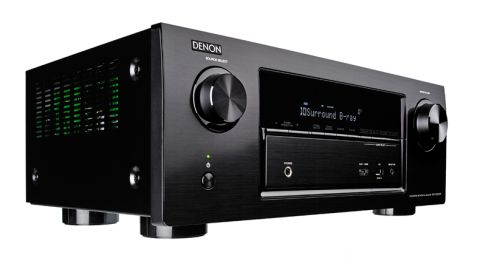 An articulate, detailed amp with stacks of functionality and future-proofing

The £500 AV receiver market is important territory for any manufacturer, and after a few years of falling short at this level, Denon has come out swinging.

The AVR-X2200W is the result – a receiver that pushes the boundaries of what we’ve come to expect at this price. This means support for both Dolby Atmos and DTS:X (the latter via a firmware upgrade later this year) alongside generous connectivity and all the future-proofing you could wish for.

Better still, this amp is as big on performance as it is on specs, proving that Denon is once again back on its A game.

Setup on the X2200W is as thorough as ever. The amp takes you through everything step by step, from how to wire your speakers to connecting and testing inputs. This is great for home cinema newbies, but can be quickly skipped through if you’re more knowledgeable.

Audyssey remains Denon’s auto calibration software of choice, which is one of the most thorough that we’ve seen at this price. Denon even throws in a cardboard tripod to help ensure your measurements are as accurate as possible.

Slot the included calibration microphone into the top of the tripod, place it at ear height and run the auto calibration. The software will prompt you to place it in eight different places in and around your listening position while test tones are emitted and readings are taken. The whole process takes around 15 minutes

Getting the X2200W online is quick and easy, with Denon’s on-screen menu available to walk you through the connection process step by step.

iOS users might prefer to take advantage of the wireless accessory configuration built into iOS7 and above, which shares your device’s wi-fi settings with the receiver in just one click. It’s handy, if only because there’s no need to type out any pesky passwords.

Once on the network, the X2200W is capable of streaming music over AirPlay and from networked devices, plus directly from the likes of Spotify and internet radio, with built-in dual antenna to help ensure a stable connection throughout.

Bluetooth is also on board, and we pair with the receiver quickly and without issue. The X2200W is a 7.2 channel amp offering 95W per channel into 8ohms, 2ch driven.

The clean design is almost identical to last year, as is connectivity, with eight HDMI 2.0a inputs (one on the front panel) and two outputs.

The inputs are all capable of supporting HDR content and 4K upscaling up to 60fps, plus they’re all HDCP 2.2 compliant and offer 4:4:4 full colour resolution for 4K content. Many of its rivals only offer such spec on one or two inputs.

Legacy connections are handled by four analogue ins and one out, two composite video and one component video, plus there are two opticals ins for digital.

On the front panel you’ll also find a 6.3mm headphone jack and a USB port for connecting USB drives or portable devices.

A nicely designed remote is included, but there is also a companion remote app that gives you a more visual layout of your amp’s capabilities. It allows you to control the inputs, choose sound modes and EQ presets, control zones and adjust the volume. Denon says there’s a new app coming, made with tablets in mind, but for now, this is fit for purpose if not the most extensive that we’ve seen.

The seven speaker terminals can be wired up as a standard seven-channel setup, or by using the surround back terminals to power a pair of Dolby Atmos upward-firing speakers instead. You’ll need to select your desired speaker setup in the menu before you run Audyssey.

MORE: 4K Ultra HD TV - everything you need to know

We start with a seven-channel set up, and load up Fast and Furious 7 to see how the X2200W handles its high-octane soundtrack. Immediately, it shows it’s well prepared for whatever the film has to throw at it, injecting a sense of excitement and eagerness into the soundtrack from the start.

The midrange shows great insight, picking out plenty of fine detail in every tyre screech and gear change, while delivering an engaging fluidity to dynamics that makes it as precise as it is articulate.

This agile quality helps ensure sounds move naturally and convincingly around the room, so much so that your ears don’t pick out individual sounds, but feel wholly immersed in the sizeable soundfield instead.

It’s a really well balanced presentation. Up top, the treble is crisp and refined while the low-end packs just enough rumble for the big action scenes. Bass is a little more polite than we’ve heard elsewhere, and could probably take a touch more punch in the big crashes and explosions.

While this was a grumble of ours with the X2100, overall the balance works much better this year, and we’re happy to take the trade off for such a refined, engaging character.

Switch to an Atmos set up with Teenage Mutant Ninja Turtles on Blu-ray and the Denon delivers a greater sense of height than in the traditional set-up. In the scene where Donatello flips one of Shredder’s vehicles, you really hear it making its way overhead in a way you can’t achieve in 7.1ch.

The only downside is that the Atmos set up squashes dynamics just slightly in comparison, but the extra height you gain goes someway to make up for it.

It would appear Denon has spent some time on the X2200W’s way with music, as it’s a big improvement to last year.

Whether you play a CD in stereo or a musical Blu-ray, it’s much more consistent with the exciting, engaging character it has with movies, while still offering plenty of subtlety and nuance.

There’s a much greater handling of rhythm and timing, and dynamically it’s full of expression and fluidity. Vocals and instruments are free to show off different textures and personalities, demonstrating good separation between one another, but also a great connection at the same time.

It’s a well-poised performance that shows great clarity and balance for easy listening.

Music streaming offers similar qualities, though music played via Bluetooth and AirPlay do see an expected drop in overall quality and dynamics.

The X2200W supports high-resolution playback of FLAC and WAV files up to 24-bit/192KHz and DSD 2.8MHz files over your network as well, but for the most stable playback, we’d recommend a wired internet connection.

See all our streaming news and reviews

Denon has thrown everything at this receiver and with fantastic results. It’s been quick to pick up where it fell down last year, and added in some excellent functionality that leaves no stone unturned in 2015.

For £500, the Denon X2200W will deliver an exciting, well-considered home cinema experience no matter what setup you decide, while future-proofing your system for some time to come in the process. If that’s not tempting, we don’t know what is.

Read all our Denon news and reviews