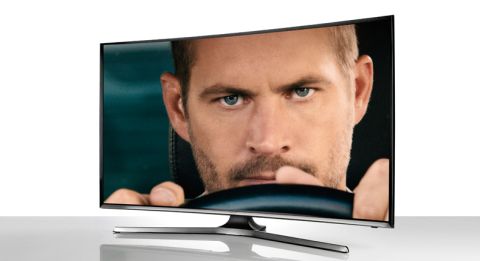 Samsung has wowed us before with superb 48in TVs, noticeably with last year’s excellent UE48H6400 taking home a Product of the Year Award for its performance and competitive price. Can this new 48in TV follow suit?

The first thing you’ll notice is that the Samsung UE48J6300 is curved – very curved. The concave screens we’ve seen so far have been gentle in their curvature, but this 48J6300 isn’t quite so subtle.

The screen itself is a chunky build, too, so it doesn’t have the usual sleek, visual flair we’ve come to expect from curved screens. It does attract your attention, though.

The strong curve does mean that the usual proportional distortions we get from a curved screen are a touch more pronounced. Those sitting dead centre to the TV will get the most immersive effect, but the picture may look a touch skewed for those sitting at an angle.

Colours can look a bit washed out from an angle, too, but it’s a minor setback to what is otherwise a phenomenally good TV for the price.

The Samsung UE48J6300’s picture is wonderfully crisp, clear and lavishly detailed. The colours are vivid and have depth to their subtle shading, looking both rich and natural at the same time. Blue skies, red paint on cars and the green grass and brown dirt have layers of subtle texture to them.

Play a 1080p stream of Daredevil on Netflix, and there’s nuance in the dark alleyways and shadows of office rooms. The show’s moody tone is conveyed, but the Samsung doesn’t try to plunge you into inky darkness.

It prefers to reveal as much as detail as possible, from strands of hair that are etched with remarkable clarity to showing more of a room’s background and corners. It gives a good sense of depth to the picture, too.

Skin tones are convincingly fleshed out, too, with characters looking realistic and three-dimensional. Whites are stark and clean, and bright scenes are imbued with an intense glow that doesn’t compromise detail or feel glaring.

The fantastical planets and architecture of Jupiter Ascending look intricate in Blu-ray, with the Samsung’s subtle yet bold contrast ensuring your gaze never leaves the screen.

With Wimbledon matches playing on BBC HD channels, you can see how composed and skilled the Samsung TV is in keeping any motion issues down to a minimum.

The crisply drawn edges of the nets, boards, players and supporters look fuzzy when switching from Freeview HD to standard definition, but the Samsung’s superbly judged colour balance doesn’t waver. We could happily keep watching the 48J6300 screen no matter what content is put through it.

We are also quite content listening to the Samsung TV’s own sound. It could do with a dose of greater clarity and subtlety, but it’s a smooth, full-bodied sound with weight at the bottom end and no brightness at the top.

Voices are easy to follow and there’s a real impact and a sense of openness to sound effects like explosions. It’s not quite a substitute for surround sound (invest in a soundbar for a more convincing experience), but it is comfortable to listen to.

Samsung’s redesigned Smart Hub interface is wonderfully minimal and to the point. Instead of taking us to a separate portal like before, a row of icons featuring the most recently opened apps and channels pop up at the bottom of the screen. It’s speedy and doesn’t intrude upon what you’re watching.

The standard remote control you get with the TV works perfectly well, too. It’s responsive and easy to get to grips with; there’s no complicated smart or touch-sensitive remote included here, though it’s no big loss.

Netflix, Amazon Prime Instant and YouTube are all present, along with All 4 (Channel 4’s catch up service). At the time of writing, however, other catch up services (such as iPlayer, Demand 5 and ITV Player) are yet to be available. We suspect these apps will appear in future software updates.

Despite this TV being in a relatively affordable price range, Samsung hasn’t scrimped on connectivity.

You get a generous four HDMI inputs, along with three USB ports and an optical output. It has built-in wi-fi as well as an ethernet port (both connections prove stable) and a Freeview HD tuner.

We have reservations about that pronounced curve, but can’t deny that the Samsung UE48J6300’s picture quality is a fantastic proposition at this price. The natural colour balance is admirable, while the rich layers of detail have us hooked.

If you’re looking for an affordable TV that will deliver an impressive picture, look no further than the Samsung UE48J6300. This 48in screen TV offers an astonishingly good Full HD performance for its £700 price tag.

Could this be the TV deal of the year so far? If you’re in the market for a big TV on a budget, we’d put this 48in screen high on your list.