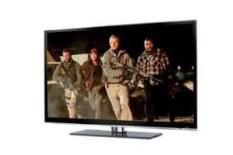 Impressive in many ways, but not flawless. It’s LG’s misfortune that two better sets have been launched in the same month

We've recently tested and loved LG's second-best TV, the 47LE8900, so a similarly capable and elegant set endowed with 3D support should be a winner.

First exposure to the 'LX9900 does nothing to undermine that impression.

It's a thing of beauty, its vanishingly slim profile confounding the widely held view that televisions with full-array LED backlighting must inevitably be stockier than their edge-lit siblings.

Specification is complete too, with 400Hz TruMotion processing, a Freeview HD tuner, LG's NetCast online service – fairly limited in content at present – and ample support for media streaming from USB, Bluetooth and DLNA.

So far so competitive, and the LG's strong showing continues with its performance from Freeview HD, DVD and Blu-ray.

After some tweaking, pictures have considerable punch and strong black depth, although some slight ‘halos' are visible when bright whites appear next to dense, dark areas of screen.

Motion handling is largely good, although on occasion movement appears too smooth, and not at all film-like.

TruMotion can be both adjusted and, if desired, turned off, so it's one to experiment with.

3D suffers a bit in comparison
It's with 3D the LG impresses and frustrates in equal measure. In the main, pictures continue to impress: however, you'll notice more incidences of ‘crosstalk'.

We also found the set's slight motion issues were exacerbated by 3D. And the reflective glass screen becomes more noticeable with 3D too: in a brightly lit room, it's quite distracting, undermining the ‘realism' of the 3D experience.

Other bugbears? Sound's not great, with some breakup at low frequencies, although the LG will output 5.1 over its optical output from Freeview HD.

But the biggest problems facing the LG are its most recent rivals such as the Panasonic TX-P50VT20 and SonyKDL-46HX903. They're better, yet cost similar money. That's enough to relegate this LG to three stars.