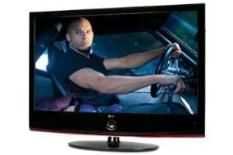 ‘Good enough’ isn’t quite good enough these days, and the LG has competition from all directions

It's safe to say we haven't begun a LCD TV review by invoking the name 'John Major' before.

To be fair, that hefty casework houses the 42LH7000's speakers, but it means that the LG is a fair bit taller than many rival 42in TVs.

Get beyond the LG's cumbersome appearance – and LG's perseverance with those red accents that you'll either love or hate – and the 42LH7000 is an extensively specified set.

1080p/24fps ability is only to be expected these days, but the inclusion of Bluetooth connectivity will be welcomed by anyone with stacks of photos on their mobile i.e. everyone.

Four HDMI inputs, twin tuners and a USB 2.0 socket are all welcome too, and thanks to the LG's exemplary on-screen menus, the screen is very easy to set up.

Good image suffers from softness
The picture from both onboard tuners is commendably stable, but a slight lack of definition means it's short on detail and inclined to softness.

Black tones are more acceptable – surprising given how bright the screen is when it's idling. The backlighting is a little too prominent, but it is perfectly even, at least.

DVD images are more of a success thanks to a convincing colour palette, improved detail levels and assured motion tracking.

But there's still a shortage of fine detail in skin tones and textures, and this isn't significantly improved by switching to 1080p Blu-ray images.

Though the LG does well with complex patterns and dark scenes, it's still a little vague with edge definition – more capable screens offer better.

The sound is crisp, to put it mildly. Put less mildly, it's brash – but not unusually so for a TV in its class.

And that's the story of the LG 42LH7000 right there: apart from the size of its chassis, it's pretty ordinary.