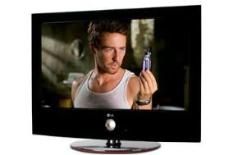 Flatscreens don't come more glamorous than this 32in set. It's just one of the screen sizes available in LG's new Scarlet range of LCD TVs.

Why is it called Scarlet? Well, the hole in the middle of the bezel emits a round, scarlet glow when the TV is in standby. You'll find the rear panel is covered in a glossy, deep red finish, too.

Peel your eyes away from the scarlet panel, and you'll notice that this HD Ready set is gifted in the socket department. Four HDMI inputs, component video and a couple of Scart sockets give you plenty of choice.

The front of the TV is gloss black with the frame extending below the screen. The LG uses Invisible Speaker technology: they're hidden around and underneath the front bezel.

In an attempt to try to boost their sonic prowess, all Scarlet sets have been specially tuned by hi-fi specialist Mr Mark Levinson.

This TV features the same remote control and intuitive menu system as the 32LG5000. It also uses LG's Intelligent Sensor technology. Strangely, the Scarlet set was much more successful at its first attempt, creating an image that was pleasing to the eye.

We did, however, still find ourselves fine-tuning the picture ever so slightly.

Blu-ray it creates a vibrant, insightful picture. The same goes with standard-definition material, too.

Fine detail is one area where the LG could improve, however, especially in moody, dark scenes. Off-air performance is passable, if a bit soft.

With its specially tuned speakers, we expected a lot from the LG - but were left feeling disappointed. Other sets might not offer quite as much detail, but they do deliver greater punch and solidity.

There aren't many TVs at this size that have the same visual impact as the 32LG6000, and though performance isn't class-leading, you don't have to compromise too much for all that style.