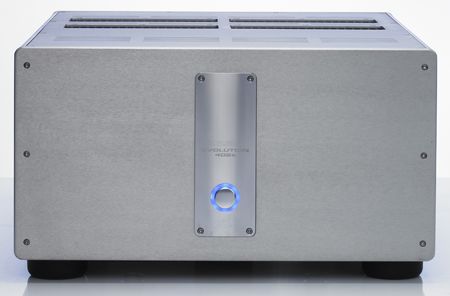 The Evolution 402e is world-class. It isn't cheap, but such quality never is

Krell has been a major player in high-end amplification for decades. Through the ’80s and ’90s it dominated the market with its hugely muscular power amplifiers and no-nonsense brand of over-engineering.

The company’s pre-eminence may have waned slightly in recent years as a result of some tough competition, but with products such as the brand-new Phantom II preamplifier and the mighty Evolution 402e stereo power amplifiers are simple things.

It runs hot too, so make sure you have adequate ventilation – otherwise your listening room will feel like a sauna after a few hours of use. Rarely do we come across a manufacturer that quotes heat output, but Krell quotes the 402e’s heat radiation at no less than 6400 BTU – that’s equivalent to a large domestic radiator.

Krell has long been the go-to brand for powerhouse amplification. Since its inception back in 1980, the company has consistently designed power amplification that can drive even the most difficult speakers with ease. The Evolution 402e is no different.

Let’s look at the figures. The 402e delivers a speaker-melting 400W per channel into a conventional 8-ohm load and continues to follow the amplification ideal by doubling power output as impedance halves. The company even quotes 1.6kW into a 2-ohm load: that’s impressive.

This readily translates in practice. We tried a range of speakers, from Tannoy’s DC6T SEs all the way through to the likes of ATC’s SCM 50s, spending the most time with B&W’s terrific 800 Diamonds.

In each case this Krell combination sounded totally at ease and in command, driving even the relatively difficult load of the 800 Diamonds to high levels without the slightest hint of effort or fuss.

It’s this sense of utter control that most impresses. Every instrumental strand has a distinct place and it’s not disturbed by anything else that happens around it, no matter how complex the musical arrangement gets.

Even demanding music such as Stravinsky’s The Rite of Spring is shrugged off with ease, as though the amplifier doesn’t even have to try in order to deliver those vicious dynamic swings or organise the mass of instruments into a meaningful whole. It’s all about stability and control.

Some listeners may not take to the Krell’s regimented approach. There’s no sense of the amp adding excitement, which of course is how it should be, but equally there’s no denying that this combination, particularly the preamp, underplays rhythmic aspects of music.

The momentum of Major Lazer’s Pon De Floor is a touch diluted, even if the power and overall punch is not. That said, this combination counters with mesmerising transparency and the ability to dig up the tiniest of details without losing track of the whole.

The most impressive example of this is in Arvo Part’s Litany, where the Krell’s astonishingly wide dynamic reach, low noise floor and top-class resolution all come to the fore. It’s with music such as this that these Krells move from being very good to simply stunning.

The Phantom II preamp is, of course, very much part of this. While not the star of this combination, its resolution, wide and stable sound staging and tonal evenness is much appreciated.

There’s no denying that the combination as a whole is deeply impressive. If you value high-volume capability, a massively wide dynamic range and the ability to analyse a recording to the nth degree, this Krell combination is king.