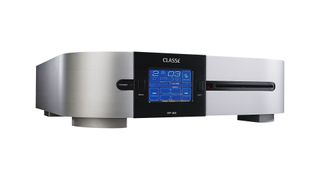 Put Classé’s CDP-202 next to pretty much any current high-end CD player and, in most cases, the 2006 product will look the more modern of the two. That’s some testament to the unit’s stylish looks and Classé’s ambitious engineering.

Calling this unit just a CD player is under-selling it somewhat though. Thanks to the use of a TEAC slot-loading DVD-ROM drive it can play CD-Rs, Video CDs, DVD-Video and high-resolution DVD-Audio discs as well.

What about SACD? While the format was still alive and well at the time this player was introduced, Classé chose not to include it as that would limit the company’s choice of transport mechanism.

Back then, it seemed as though DVD-Audio and SACD would be the future as far as high-quality music formats were concerned, and so the omission of the latter raised a few eyebrows. But time has shown that neither format went on to fulfill that promise.

Still, back then we remember using the Classé CDP-202 to play DVD-Audio discs – Missy Elliot’s So Addictive and Beethoven’s 9th Symphony among them – and found ourselves impressed by the clarity, detail and dynamic subtlety on offer.

The CDP-202’s build and finish impresses even by current standards. The big news now, as then, remains the LCD touchscreen. Classé had to balance the need for a full set of controls that would work CDs and DVDs, with the desire to produce a stylish player with a clean, uncluttered look.

The answer was a 3.5in LCD touchscreen that could adapt its button layout to the type of disc inserted and which could also be used as a screen to navigate DVD and DVD-Audio menus. You could even watch a film on it if you wanted, though we wouldn’t recommend it.

Put aside the screen’s poor resolution and lack of contrast – such things have improved much over the years – and concentrate instead on the foresight of the manufacturer to include such an interface. It was a bold move and we applaud Classé for doing it.

The rest of the CDP-202 casework is equally impressive. It’s stylish, impressively rigid and beautifully finished. In 2006, this player retailed for £4750 and it looked worth the money.

That curved front panel is made of a single piece of aluminium and we still find it amazing that the company managed to bend it with such precision without causing cracks. The curved look has since become a Classé trademark, but it started with the Delta Series that this player is part of.

Take a careful look around this player and it’s easy to appreciate the obsessive attention to detail. When there isn’t a disc loaded, the CD slot is lit to make insertion easier in a dark room, and the whole player sits on four isolation pads that decouple it from any vibrations in the support, so helping performance.

Look inside and you’ll find that such decoupling continues with ultra-soft mounts for the transport mechanism, which makes the job of reading the disc easier. The circuit board layouts are neat and there’s no denying the quality of components or the generosity of the power supply arrangement.

By the standards of the time, the CDP-202 is very well equipped. Aside from the range of disc formats the unit can play, it also includes a switchable volume control – purists can connect the player straight into a power amplifier (or active speakers) bypassing a preamp altogether if they want to.

The shorter, purer signal path of such a configuration promises more transparency and detail, but is only practical if you don’t have multiple sources, of course. Go into the set-up menu and the player’s output can be fixed, so making it suitable for systems that already have a preamp in the signal path.

As we would expect at this level, there are balanced XLRs along with standard single-ended outputs as well as optical and coax digital outs. Alongside a whole host of sockets for home install purposes – multiple trigger inputs, connections for a remote IR receiver so the player can be installed out of sight, an RS-232 port and an in-house comms connection – there are also a composite and S-Video video outputs.

No high-quality HDMIs or component video options here. Despite the CDP-202’s potential, video replay was never a priority for this model. That was a job for others in the range.

Back then, the idea that the internal digital-to-analogue converter of a CD player could be used with other digital sources wasn’t a thing, so the CDP-202 doesn’t have any digital inputs. That’s a shame as we suspect the Classé’s up-sampling DAC circuit with its use of three top-end Burr-Brown PCM-1792s would still sound better than all but the very best premium outboard digital-to-analogue converters on the market today.

Our sample of the CDP-202 came to us freshly repaired by Classé – its screen had developed a fault – and though the repair took the best part of two months, the player came back working as it should. We’re pleased to report that the company still supports older products.

Given a day or so to warm up, this player shines. In most ways, it’s still good enough to be compared to modern high-end CD players. This is something of a surprise, as in our experience digital gear doesn’t tend to age as gracefully as analogue. A lot of the performance of digital equipment is down to processing power and software engineering – both areas that improve in leaps and bounds over time.

Play Tchaikovsky’s 1812 Overture and this player sounds right at home, delivering the piece with plenty of authority and scale. Classé’s products tend to favour a smooth, refined and uncluttered presentation and the CDP-202 is no different. There’s a touch of excess richness through the midband and bass, and while that robs the player of absolute neutrality, it does result in a presentation that is easy on the ear.

Don’t think that the Classé isn’t entertaining to listen to though. It has a lovely, fluid way with dynamics and crescendos hit with ferocity when required. There’s a good degree of agility here and that full-bodied bass has enough in the way of agility and tunefulness to convince. This remains a hugely capable machine that’s still capable of digging up a large amount of detail. The best of today’s machines have even more resolving power, but the differences aren’t a large as the difference in age would suggest.

The stereo image is excellent, with instruments laid out with precision in a spacious and carefully layered sound stage. Image stability is absolute, no matter how demanding the piece gets, and we’re left pleased by the player’s composure and control when it’s pushed hard. There’s never a sense that the CDP-202 is stressed and that makes it easier for the listener to sit back and enjoy the music.

That easygoing nature has a slight downside when we listen to the likes of Kanye West’s Yeezus or Nirvana’s Nevermind though. Hard-edged music such as this comes across as a little too civilised for our tastes, lacking that final degree of bite necessary to truly thrill. Still, the Classé has enough in the way of punch and rhythmic drive to keep us listening well into the night.

The CDP-202 remains a wonderfully capable machine. Find one in good working order and it still makes for a fine high-end CD source. Its refined, easy-going balance means that the player works better across a wider variety of recordings than most of the alternatives. Tempted? We sure are.