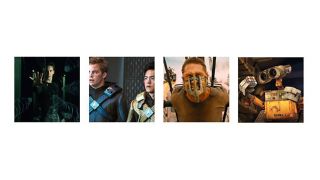 David Lynch once said, “films are 50 per cent visual and 50 per cent sound. Sometimes sound even overplays the visual.”

He’s got a point: imagine Jaws without the dramatic ‘dun-dun’, 2001: A Space Odyssey without the visceral sound effects, or even – gulp! – Jurassic Park without its memorable theme.

If you've chosen the comfort of your home over being covered in popcorn at your local cineplex, the quality of your own speaker system for movie night is hugely important. And while there’s value in practical, space-saving soundbars and soundbases, nothing beats a full-fat surround-sound speaker package for the ultimate home cinema experience.

Whether you have a 5.1- or 7.2-channel system, or even a Dolby Atmos set-up with extra in-ceiling speakers, these film scenes will reveal how good your AV system really is. Volume dial at the ready...

Zhang Yimou’s gorgeous martial arts film has a soundtrack as vivid as its exotic picture - and the echo-game scene will be the first to detect any gaps in your system's soundfield. Beans, hurled by a police captain in slow motion, meticulously ping around the room and bounce off a circle of drums, requiring your system to track their trajectory precisely. Integration is key here, and the soundfield should take on the dimension of – and be as tight-knit as – the drum arrangement, thus putting you at the centre of it. Blistering percussion is a good test of dynamics too, while smashing glass and the dancer’s twinkling headpiece will challenge your speakers’ tweeters to keep a lid on the treble.

Ready for more? Later on, the five-minute bamboo-forest fight – just as awesome as it sounds – offers a similar challenge when it comes to precision and cohesiveness, as branches creak, break and soar through the air.

Last year, the electronic pop pioneers released a 3D concert film (in Dolby Atmos, featuring their eight-album-spanning ’70s and ’80s oeuvre) performed during shows between 2012 and 2016. We know what you’re thinking: "hand me my debit card right now."

While the absence of crowd noise arguably detracts from the bedrock design of the archetypal gig experience, the 5.1 Dolby Atmos presentation (the Blu-ray also includes a ‘Headphone Surround 3D’ mix) offers an all-encompassing, spatial-dynamic and cohesive blanket of sound that’s as mesmeric as the languid projections behind the techno machine men. And it’s the 14-minute live version of Autobahn – one of the most precise and polished tracks – that you’ll especially want to prick up your ears for. The bottom line: it should sound sublime through your system.

And look it, too. Promising a multi-sensory celebration of melody and technology, it happens to be one of the more visual performances, too, with contrasting projections displaying antique cars and driverless cars on empty, sun-kissed motorway vistas.

It’s easy to point to the most action-heavy sections of a film as a great workout for your speakers and AV receiver. But it’s the quieter moments that can give you just as much information on how subtle, evocative and dynamic your system can be.

The scene where we’re first introduced to Rey in The Force Awakens is completely devoid of any loud noises or even dialogue. It’s all about space and silence – conveying the immense, vast emptiness of the cavernous ruins of the star destroyer should elicit a sense of awe.

Your system should also be able to convey the gentle shift in atmosphere as Rey emerges out into the desert plains of her home planet, the solid, scraping clunk of metal as she loads up her speedster, and the delicate, agile strands of Rey’s Theme. Handled bluntly, it loses that sense of wonder and adventure.

John Wick is the best thing Keanu Reeves has done since The Matrix. In fact, the retired-but-not-anymore hitman is probably cooler than Neo in every way – better suits, better gun-fights, better one-liners.

And the disc is a wicked test for your home cinema system. Take chapter 7, the club scene where he dispatches dozens of henchmen in a brutally efficient way. Your surround system will need to have ballet-like poise and agility, alongside huge reserves of muscle and punch, to handle the exquisitely precise choreography as Reeves/Wick punches and point blank shoots people in the face without missing a beat.

On Blu-ray, the film’s Dolby Atmos soundtrack gives an extra flair, engulfing you in the club’s pounding bassline and tense atmosphere. It draws you further into the thrilling action as Wick wreaks vengeance on those who killed his dog.

The importance of sound in film is irrefutable, but rarely to the extent that it is in Pixar’s WALL-E, where sound is both the narrative and language of the largely dialogue-free animation. One of its most charming scenes also happens to be among the more sonically colourful too, as one of Hollywood’s most-loved robots is propelled through space on a fire extinguisher with Eve tumbling after him.

You should be able to track their position on the screen with your eyes closed, hear the faint sprays from the extinguisher and the robots’ subtle mechanical clicks – a mix of real-world sound and synthesizers – in your rear channels, and be immersed in the uplifting instrumentation and ethereal ambience created by sound designer Ben Burtt. There’s even a bit of dialogue from the red-suited humans in the middle for your center speaker to have a chance to shine.

Through 95 minutes of musical montage, live action and animation, this rock opera – the brainchild of Floyd member Roger Waters – tells the tragic story of rock star Floyd ‘Pink’ Pinkerton (Bob Geldof) and his psychological downfall. Yes, it’s dark and downright depressing but - Floyd fan or not - there's no denying it’s an audio treat.

Among the first animated films with a Dolby Stereo soundtrack, it was presented on DVD in 1999 with a 5.1 Dolby Digital surround sound mix. The film didn’t win Best Sound at the 1983 BAFTA Film Awards for having just one or two good-sounding scenes, but the one backed by Another Brick in the Wall (Part II) – BAFTA winner of Best Original Song, too – is a sure highlight, and a great test for explosive dynamics and midrange solidity, not to mention your subwoofer’s tunefulness. You just might want to turn it down when the school kids rampage around their classroom!

We’ve seen it a gazillion times by now, but the scene where Bones keeps injecting Kirk with vaccines, the reveal of the USS Enterprise and the ship going into warp speed remains one of the best and funniest moments of JJ Abrams’ rebooted Star Trek.

It’s also a magnificent test for your home cinema system. You should be able to feel the height and movement of ships that fly over the Starfleet students bustling about in the hanger; the change in scale and atmosphere when Bones and Kirk move to a smaller room; hear the little beeping, blinking noises inside the Enterprise; and the deadpan humour in Captain Pike’s gravelly voice.

The moment of truth comes when Michael Giacchino’s stirring score fills the entire room and reaches a beautiful flourish when you first see the Enterprise. The soaring music should end with blaring horns and a moment of awe as the pristine starship is finally revealed. And when it hits warp speed, your system should be delivering that gut-punching, precise sound effect with layers of deep, taut bass.

Thanks to its Ultra HD Blu-ray release, Ridley Scott’s seminal sci-fi flick gets the Atmos treatment – a presence that can be felt right from the off, with it producing an impressive sense of heft, depth and dynamism.

Crowd scenes (like the one in chapter 17) hustle and bustle, with effects showcasing pinpoint accuracy when it comes to placement within the soundfield. It’s also one of the better uses of overhead channels with the rain – and it rains quite a bit in Blade Runner – adding a sense of verticality a 7.1 track couldn’t aspire to.

Vangelis’ enigmatic score gets a wonderful outing and, when combined with the effects, offers a great example of the immersion Atmos can bring.

On the surface, there’s a lot happening in Guillermo del Toro’s blockbuster Pacific Rim. But in many of the scenes, such as the fight between the colossal robot Gypsy Danger and the Kaiju in this chapter, there is a surprising amount of time when the sound dies down to heighten the tension of the impending monster attacks.

When using this film to test your sound system, the little details should be as discernible as the booming horns in the moments of conflict. You should be able to hear clearly the muted woosh of the ocean as the camera moves underwater, or the crackles and whirs of the Jaeger as it builds up to a powerful punch.

Good balance will also ensure these small touches are not overpowered by the booming horns of the soundtrack at the climax of the fight when Raleigh Becket (Charlie Hunnam) loses his brother Yancy (Diego Klattenhoff) to the beast.

Keanu Reeves makes a second appearance on this list with the Wachowski's seminal film. The Matrix gets a Dolby Atmos soundtrack for its 4K Blu-ray release, and it's a belter. The sound design is so important for this film and it is impeccably rendered, with a clarity that's enormously impressive. Dan Davis's atonal orchestral score should fill the surrounds, and consequently your room, with an expansive quality that's an excellent, expressive accompaniment to the action on screen.

But it's in the third act when the action ramps up that the fun happens: the moment when Neo and Trinity call for guns ("lots of guns") should fill the room with a huge, expansive sound, while the iconic Bullet Time sequences should pan through your surround speakers so well that you'll be tempted to reach for the rewind button. Bass needs to be a big and arresting presence, but sound clean and tightly controlled.

The Matrix's Atmos soundtrack offers cacophonous, room-shaking sound that's spacious and enveloping – a demanding workout for your cinema system. When it soars, it sounds magnificent.

This two-hour chase opera might sound cacophonous on a lesser system, but it isn’t simply a wall of noise. You’ll need a mighty powerful system to really feel the thunderous roar of the souped-up engines - one that can convey the scale of the desert wasteland as the wind storm tears across the jagged and rusty monstrous cars.

Junkie XL’s soundtrack is orchestral and furious, with angry drums egging the chase on while soaring strings and electronic beats punctuate the action on screen. You’ll need a system that’s precise and articulate enough to keep the tension of the pounding soundtrack and the cars and explosions running alongside each other.

Each gunshot, engine rev and grunting Tom Hardy dialogue need to be distinguishable. But the best part is the distorted guitar riffs that suddenly flare up whenever the camera cuts to the Doof Warrior – the red jumpsuit wearing guitarist who’s attached to his insane rig on bungee ropes and plays a double-necked guitar that shoots flames. Yes, really. It’s a moment of absurdity that you can't help but cackle gleefully at, before your mind is whipped back to the noisy chase and all that sand.